Teddy Pendergrass: He was 'Dad' to me 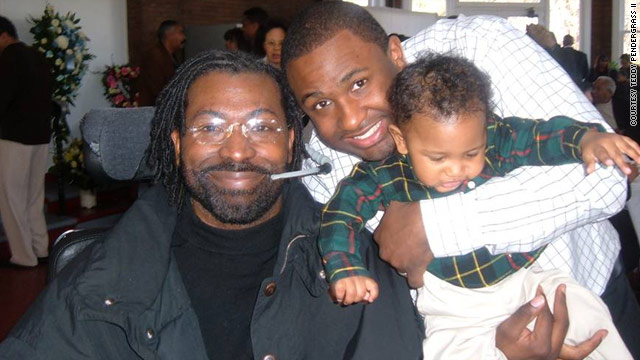 Editor's note: Teddy Pendergrass II, 35, is a financial consultant who lives near Philadelphia. He is also father of two children, Alaynna and Teddy III. A public viewing of Teddy Pendergrass Sr. will be held on Friday at Enon Tabernacle Baptist Church in Philadelphia, with a private funeral the next day.

(CNN) -- Many knew my father, Teddy Pendergrass, as the dynamic, smoky soul singer who sold millions of albums, wooed crowds and made women swoon. He was the man who would "Wake Up Everybody," then "Turn Out The Lights" and "Close the Door."

But to me, he was just Dad.

He was the gentle man who bought me my first baseball glove. He was the guy who took the brand new baseball and scuffed it up on the ground so it was easier to handle. He was the man who would wrap that ball in a belt and slap it in my glove to break it in.

That was my dad.

Dad loved his cars. They were his toys. He would collect them and play with them, alternating between his Corvette, his Ferrari and his Rolls-Royce.

In fact, it was in the Rolls that, on March 18, 1982, while driving on a winding Lincoln Drive near our home in Philadelphia, Pennsylvania, he hit a guardrail and crashed into a tree. That accident severed his spinal cord, left him paralyzed from the chest down and changed his life forever.

But I choose to remember him as he was long before the accident, driving around in his red Ferrari. I could hear him coming home all the way from the Gladwyne exit in that loud sports car.

It would make me excited because, in those years before the accident, he wasn't home much. I guess he traveled a lot. So when he did come home, when we heard that engine of the Ferrari, we knew it would be special.

Dad was a cowboy. He loved to wear his boots and hat.

He had a very adventurous spirit. One summer day when I was about 6 or 7, he proved it. Whenever he left the house he would grab his Louis Vuitton pouch. That was my signal that he was going somewhere. And on that day, that somewhere was our favorite toy store, Ardmore Hobbies.

I ran out to the car and got in on the passenger side of his T-top Corvette. If you knew my dad you knew he loved to drive fast, making the shifting noises as he navigated the neighborhood. On this day, we drove down a street with a big dip in it. Dad would drive as fast as he could and get the car in the air, off of all fours. As we went airborne, he'd scream "Yeeee Haahhh," like he was Bo Duke on "The Dukes of Hazzard."

But this time, on the way down, Dad hit an oil slick. He had to cut the wheel hard and we spun twice, ending up on the other side of the road, just six inches from a big tree.

If anyone ever wondered why my head has a lump at the top, it's because, as we were spinning around, I hit it and cracked the glass T-top of the 'Vette.

Needless to say, he was upset. It was the last day we did the big jump together. But still, that was the best trip to the toy store I had ever been on.

Dad was a chef. He loved to cook and had a true passion for food.

He loved to eat, too. If lamb chops were anywhere on the menu, they might as well as put in two orders for him when he walked through the door.

But his favorite dish would be what became known in our family as "Umi Goomi." Umi Goomi was his name for the collection of food left in the fridge from the last two weeks. Most people would throw it away. Not my dad. He would put everything that he wanted in one frying pan, and add rice (we always had rice around).

He would take that and stir everything around until it was sizzling hot with steam rising from it. Then he'd add some hot sauce -- you know the one with the big hot pepper on the label. Hot sauce was the magic ingredient for anything he ate.

And Dad loved being dad. He never really knew his own father when he was growing up. They only met when he was 10 years old. So when he would be with my sisters and me, he wanted to make sure it was special.

I remember another time, after the accident, when I was about 15 years old. He came by and told me he was going to take me out, just him and me. We got in the car and drove about 45 minutes. I had no idea where we were going.

As I looked up, we pulled into a parking lot. Staring at me was a giant mouse with a purple hat. Low and behold, it was Chuck E. Cheese!

Wow, Chuck E. Cheese, for a 15-year-old. I played and played and played, like I was 6 again. Who cared what it looked like? This was a gift from my Dad. That day he thought he had conquered the world. I can still remember the smile on his face.

"Son," he said, "I just wanted to spend some quality time with you."

Dad, who died at the age of 59 after battling colon cancer, always wanted to move to a place on a beach and watch the warm water, feel the cool breeze. But, after the accident, he never did.

I know, right now, he has finally made it to that beach, and is sitting with his face turned to the sun. And maybe he is eating some Umi Goomi, with hot sauce.