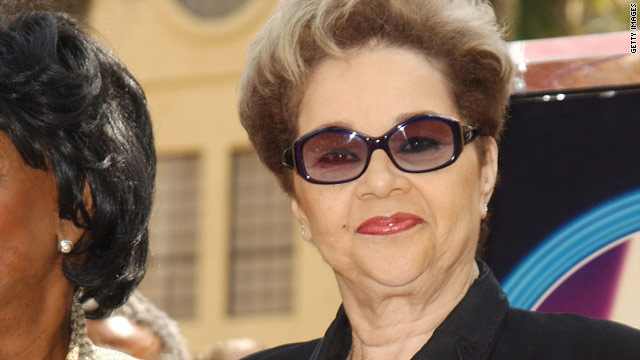 Etta James is best known for her lush recording of "At Last."
STORY HIGHLIGHTS
RELATED TOPICS

James, 72, was diagnosed with MRSA -- a bacterial infection resistant to many antibiotics -- by doctors at a Los Angeles hospital where she was admitted for treatment last week, Donto James told CNN.

Life has been difficult for James, best known for her 1961 hit "At Last," since she was diagnosed with Alzheimer's disease a year ago, he said.

"Right now she is very confused," her son said.

He described his mother as "quite combative ... fighting, biting -- I'm talking way off the chart."

"I am going to end up losing my mother if it keeps going on like this," he said.

"There has to be another doctor out there who can tell me what is going on with my mother," he said.

Etta James' illness, he said, led her to the controversial comments at a concert a year ago where she suggested pop star Beyonce should be "whipped" for singing "At Last" for President Obama's inaugural ball.

"I can't stand Beyonce," she told a Seattle, Washington, audience. "She has no business up there, singing up there on a big old president day, gonna be singing my song that I've been singing forever."

She was upset about the inaugural, her son said, because "mother was supposed to be hired, but she wasn't well."

He said she was also suffering from "drug-induced dementia," a result of painkiller medications for a back injury. She has stopped taking the drugs, he said.

Her son, who plays in Etta James' band, said he's been frustrated because they've had to cancel several important shows -- including one last summer at the Hollywood Bowl.

"I want my mother back onstage again," he said. "I know it can happen."

Donto James said he was talking freely to CNN about his mother's medical problems because he's hoping someone can help him understand what is going on.

"It's 2010 and we should know something, should be able to diagnose," he said.