Leif Garrett out on bond after drug bust 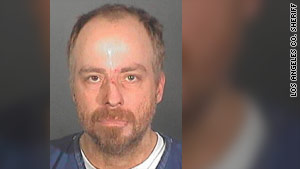 Leif Garrett was "shaking and sweating" when deputies approached him at a subway station on Monday.
STORY HIGHLIGHTS
RELATED TOPICS

He was 16 when he scored his first pop chart hit, "Surfin' USA," in 1977. It was followed by a four-year run of songs that kept young girls swooning and teens dancing.

When deputies approached Garrett Monday morning at the Metrolink station, he was "acting in a pronounced way, shaking and sweating," Whitmore said.

Garrett told them he was "nervous around law enforcement because of other meetings with them in the past," he said.

The singer did jail time four years ago after he was arrested with heroin while he stood on a subway platform at another Los Angeles transit station.

This time, Garrett told the officers that he had no drugs and he agreed to let them search him, Whitmore said.

As they searched, Garrett told them he did have a little heroin in his shoe. "That was found and it was black tar heroin," Whitmore said.

Garrett was taken to the East Los Angeles sheriff's station, where he was booked and held on bond. His court date is February 24, Whitmore said.

CNN's Michelle Wright and Alan Duke contributed to this report.