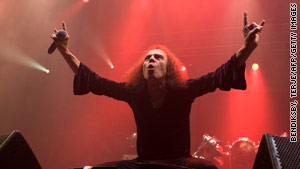 Los Angeles, California (CNN) -- A public memorial service for heavy metal rocker Ronnie James Dio is planned for Sunday, with members of the Westboro Baptist Church saying they will picket the ceremony.

The church in Topeka, Kansas, is known for its intolerance of gays and its picketing of soldiers' funerals.

A picketing schedule on the church's website said protesters will be at the Dio memorial at Forest Lawn Hollywood Hills in Los Angeles, accusing the 67-year-old rocker of worshipping Satan.

Dio died on May 16 after a battle with stomach cancer.

Charges of devil-worshipping have often been leveled against heavy metal music. Dio, in particular, was a favorite target.

He popularized the "devil's horn" gesture, where the index and the little fingers are upright and the thumb is clasped against the two middle fingers.

He has said he was taught by the sign by his superstitious Italian grandmother as a way to ward off the "evil eye."

But many fundamentalist Christians have taken issue with the gesture, alleging that it is a tribute to the devil.

"Ronnie hates prejudice and violence. We need to turn the other cheek on these people that only know how to hate someone they didn't know," said Dio's wife, Wendy, about the planned protest.

Wendy Dio said the memorial will host a donation center for her husband's "Stand Up and Shout Cancer Fund," named after one his songs.

Dio most recently was touring with Heaven and Hell, a version of Black Sabbath renamed for legal reasons. All shows were canceled last March because of his illness.

His last public appearance was in April at the Revolver Golden Gods Awards, when he accepted a vocalist of the year award for his work on last year's Heaven and Hell album. Dio appeared frail, but he spoke while accepting his award.

His 1960s rock group The Electric Elves evolved into Elf by the early 1970s, when the group played heavy blues rock.

Dio's rock became darker with his band Rainbow, which he left in 1979 to join Black Sabbath.

Dio left that band in 1982, but he had a brief reunion with the group a decade later.

He formed the group Dio in 1982 and later Heaven and Hell.