Bono cheers release of Suu Kyi, 'Mandela of our moment' 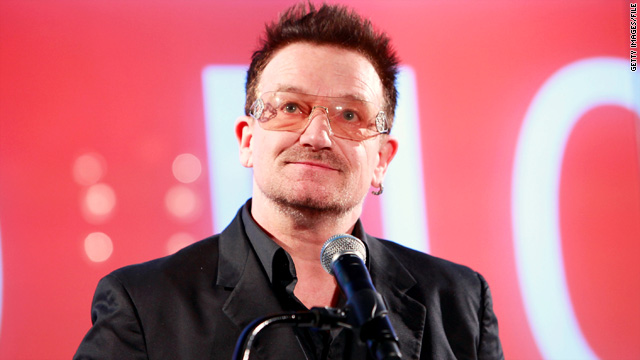 (CNN) -- While Myanmar's military rulers ordered Aung San Suu Kyi detained for two decades, legendary rock band U2 gave her a voice -- in the form of the hit song "Walk On" -- on the world stage.

Bono, the Irish band's lead singer and a long-time political activist, was among those cheering the pro-democracy activist's release Saturday.

In an exclusive CNN interview, Bono said he was "feeling great" for Suu Kyi, adding that he's hopeful the action might signal real political progress in the south Asian country after decades of political strife.

"It's sort of a cautious joy, because though she's out in the world, ... she's perhaps more vulnerable," Bono told CNN. "I'm very excited, very thrilled at the possibility that this might be the beginning of some sort of rational discussion."

Bono said he'd spoken with members of Suu Kyi's family recently, but hasn't heard from them or the democracy leader since her release Saturday. Still, he said he's been eagerly following the recent developments of a woman he has deemed a "real hero" for her humility, conviction and idealism over the years.

"She is kind of the Mandela of our moment," said Bono, referring to Nelson Mandela, who spent decades in prison during South Africa's apartheid era prior to his release and political ascent. "She's a character of great grace. Her struggle has become a symbol of what's best about our humanity and worst."

U2 and Bono have long been among Suu Kyi's most high-profile advocates.

The band wrote its hit 2001 single "Walk On" about the 1991 Nobel Peace Prize winner. Bono wore a t-shirt emblazoned with Suu Kyi's face in the music video, while tens of thousands of concertgoers sometimes held up her picture while the song was played.

In a 2004 Time magazine article, Bono explained why U2 dedicated the song to a woman he called "a real hero in an age of phony phone-in celebrity."

"Suu Kyi, with an idea too big for any jail and a spirit too strong for any army, changes our view -- as only real heroes can -- of what we believe is possible," he wrote.

"And if your glass heart should crack

And for a second you turn back

It's sort of a cautious joy, because though she's out in the world, ... she's perhaps more vulnerable.
--Bono
RELATED TOPICS

What you got, they can't steal it

No, they can't even feel it

Walk on, walk on

In 2004, U2 joined forces with R.E.M., Paul McCartney, Eric Clapton, Sting, Pearl Jam, Peter Gabriel and other rock stars on an album called "For the Lady," which was released in support of Suu Kyi.

Bono said his excitement at Suu Kyi's release was tempered by fears that she could be arrested again or become a target for political opponents. He said that he hoped the United Nations and other world bodies would seize the moment, and facilitate talks to create a permanent political resolution in Myanmar.

This was the third time Myanmar's regime has released Suu Kyi from house arrest. Benjamin Zawacki, Myanmar expert for Amnesty International, noted that her last release had been unconditional and then she was thrown again into house arrest.

"For this to be real, there has to be progress toward real peace," said Bono.