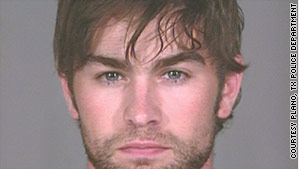 The misdemeanor charge involves possession of less than two ounces of marijuana, according to the police report.

The charge carries a maximum of 180 days in jail and a $2,000 fine, although a first offender can usually expect a year or less probation, according to Texas criminal lawyer George Reul. Jail time is rare in such cases, he said.

Many defendants get "deferred adjudication," under which they are not technically convicted and it is removed from their criminal record if they successfully complete probation, Reul said.

Crawford has won two Teen Choice acting awards for his role as Nate Archibald in "Gossip Girl," which is in its fourth season on the CW network.