The evolution of the TV family 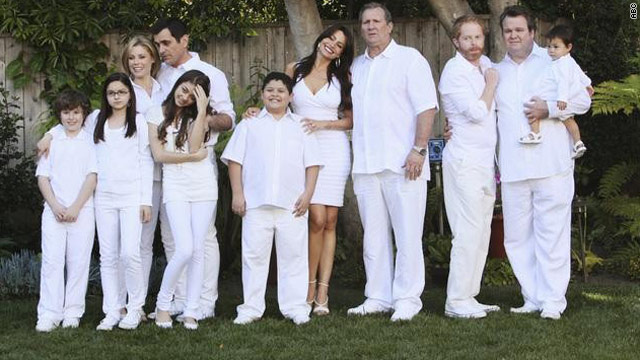 (CNN) -- Through the years, the structure and definition of "family" has changed in many households -- including the ones on television.

"We have moved from what's most ideal to what's most entertaining," said James Hibberd, TV editor for The Hollywood Reporter. "During the golden age of television, the focus was on these families that everyone would like to have that were also amusing and entertaining. With the advent of reality television, we introduced the dysfunctional family in the 1990s."

And audiences seem to love it. Years before the runaway success of "Jersey Shore," "The Osbournes" was one of MTV's biggest hit shows, with millions of fans clamoring every week to view the shenanigans of rocker Ozzy Osbourne, wife Sharon and their children.

The beloved series "Leave It to Beaver," which was recently released in its entirety on DVD, stands in sharp contrast to some of the images of family on the small screen today.

Long gone are the days of series such as "The Donna Reed Show" or "Father Knows Best" with the picture-perfect home life. Today's television families are more apt to be discussing interracial dating or single motherhood à la "Keeping Up With the Kardashians" or the challenges of a gay couple parenting like on "Modern Family."

"There's a family for just about everyone on TV today," Gold said. "That's pretty remarkable and says something about TV and the way it explores social trends and our society."

The evolution of the American family on television has been steady. The Cleavers on "Leave It to Beaver" gave way to the blended family on "The Brady Bunch" and the single-parent home on "One Day at a Time." Some of the names are as deeply engrained in the minds of viewers as their own families -- such as the Partridges, the Bunkers, the Huxtables and the Waltons.

But current television families are deeply rooted not just in the portrayal of fictional families but also in the world of reality TV. That term didn't even exist in 1973 when PBS aired the documentary "An American Family."

Audiences watched with rapt attention the everyday lives of the Loud family featured in that documentary. Cameras were present when son Lance Loud revealed he was gay and the parents, William and Pat, split up.

Many believe that "An American Family" sowed the seeds that made it only natural years later for scores to tune in to the breakup of Jon and Kate Gosselin on their now-defunct hit show, "Jon & Kate Plus Eight."

"I think families are less idealized than ever," Gold said. "Reality TV, which is still heavily produced, does allow for a more accurate portrayal and more extremes."

And Gold points out that even if the majority of Americans may not support same-sex marriage, they are still able to find enjoyment in characters such as gay couple Cameron Tucker and Mitchell Pritchett on ABC's "Modern Family."

Maureen "Mo" Ryan, television critic for AOL, said that unlike the "Beaver" days when there wasn't much variation between the characters of Theodore "Beaver" Cleaver and his brother Wally other than their ages, audiences now demand richer characters with more specificity.

"Television in general has had to move toward more interesting characters because people are seeing characters on reality TV that they wouldn't ever see on a typical sitcom," Ryan said.

Yet as much as viewers crave individuality, Ryan said they are still drawn to the universal commonality found in television families.

"The families on the shows aren't as idealistic, but they remain relatable," Ryan said. "The most successful shows, comedies especially, have families that you can look at and see parts of your family in them."

Walter Podrazik, consulting curator of the Museum of Broadcast Communications in Chicago, Illinois, said television has always been about the business of identification and entertainment.

"[Family] is a shortcut to instant identification," he said. "It's 'Oh yeah, I've got one of those,' or 'I came from a family like that.' Then it's just a matter of how much fun you want to have with it or how dramatic you want to make it. It's interesting that so many of the plots, whether it's now or going back 50 years are about the family coming together."

ABC's "Modern Family" has been enjoying not only buzz from fans for its comedic take on home life but also critical success. The show revolves around a patriarch who is married to a younger woman and raising her son, the patriarch's daughter who is married with three children and the patriarch's son who is one half of a gay couple raising an adopted daughter.

The show occupies what The New York Times has called "a sweet spot in television" and this week scored Emmys for best comedy and best writing as well as for outstanding supporting actor in a comedy for Eric Stonestreet, who portrays Cameron Tucker.

The Hollywood Reporter's Hibberd said the ABC series enjoys the distinction of being both old and new.

" 'Modern Family' is a bit of a throwback because it's both gently flawed and idealized," he said. "The characters on there aren't perfect, but at the same time they are all people that the average viewer would love to have in their own family."