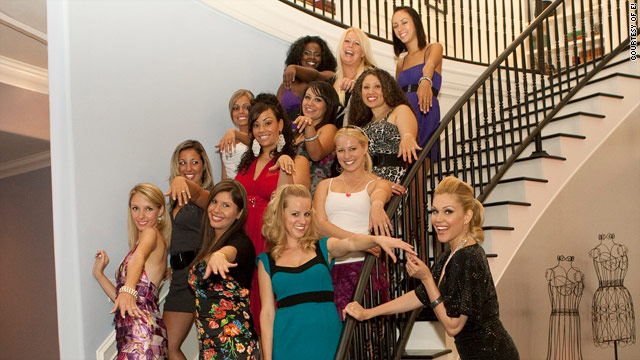 Just when you thought there couldn't be a more shocking trade-off for national exposure on a reality show, E! brings you "Bridalplasty."

The new series, set to make its debut November 28 at 9 p.m., will feature 12 brides-to-be competing for a different plastic surgery each week as they prepare to walk down the aisle.

Despite "Bridalplasty's" unsettling tagline -- "the only show where the winner gets cut" -- the reality competition follows a surprisingly standard format: Each week, the contestants will participate in a wedding- or relationship-themed challenge, such as picking the perfect dress, according to Jason Sarlanis, vice president of original programming and series development for E!

So what's the grand prize? The last bride standing will receive her dream wedding, paid for by the show, and the remaining procedures on a "wish list," which she drafts at the beginning of the season with the help of Dr. Terry Dubrow, who appeared on Fox's "The Swan" in 2004. The procedures will range from veneers and Botox to breast augmentations and tummy tucks.

And like many reality competition shows, a winner is granted immunity each week and thus is exempt from competing the following episode. But, on "Bridalplasty," immunity is also a form of "medical leave."

"[Contestants] will wait until they're ready to return -- doctor's orders," Sarlanis said. "They won't participate in any part of the episode that could mess with recuperation."

But recovery time is not the only concern for Dr. John Diaz, a board-certified plastic surgeon in Beverly Hills, California, who is not affiliated with the show. Diaz says, "By competing in a show like this, patients might feel pressured to undergo surgeries they wouldn't have under normal circumstances."

That pressure, he says, can stem from contestants' peers on the show, as well as the fact that the surgeries are free.

Who doesn't want to look their best on their wedding day? ... At the end of the day, we're making a really great show.
--Jason Sarlanis, vice president of original programming and series development for E!

"If a contestant is only interested in her nose, but every other woman around her is talking about her breasts, all of a sudden, she may feel pressure to do her breasts, as well," Diaz said. "It's almost like a peer pressure spurred on by this competition."

Diaz also said that major events, like weddings or reunions, sometimes cause people to evaluate their appearance.

He added: "A show like this could go different ways. At the end of the day, we're making a really great show."

Supporters and critics alike agree that "Bridalplasty" will most likely be a hit.

"This is the natural, absurd next step for reality programming. ... It has all the elements of what would be successful for a faceless demographic: bridal themes, aspiration themes, plastic surgery," said Colby Hall, the managing editor of Mediaite.com, a website that assesses print, online and broadcast media.

"It's going to be a huge hit in the way 'Jersey Shore' was a huge hit," he added. "It's a train wreck to watch, but people will love to sort of feel better than the participants."

When you start planning a wedding to include lip [injections] and rhinoplasty in addition to flower arrangements, it's almost as belittling to your groom as it is to yourself.
--Sarah Polonsky, senior editor at BettyConfidential.com
RELATED TOPICS

"Anyone emotionally unstable enough to desire that much plastic surgery really needs Botox for the soul," Polonsky said. "They should be giving out therapy instead of nose jobs. ... When you start planning a wedding to include lip [injections] and rhinoplasty in addition to flower arrangements, it's almost as belittling to your groom as it is to yourself."

Of course, "Bridalplasty" is not the first TV show about plastic surgery. "The Swan" and ABC's "Extreme Makeover" both followed subjects who went under the knife to modify their appearance.

These shows are a double-edged sword for plastic surgeons, said Dr. Phil Haeck, a practicing plastic surgeon in Seattle, Washington, and president of the American Society of Plastic Surgeons.

"It puts plastic surgery in a possible negative light, in that it cheapens the value of surgery. ... On the other hand, it does generate some talk -- both positive and negative," Haeck said. "From a marketing standpoint, any time your product is talked about generically, it may be somewhat beneficial."

And "Bridalplasty" is certainly generating talk.