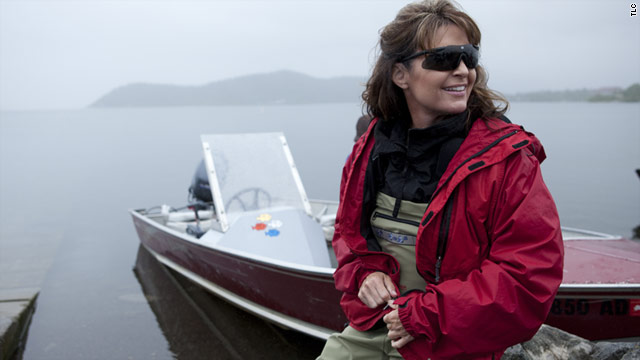 (CNN) -- This year, TV fans bid a sad farewell to some beloved scripted programming, with long-time favorites such as "Law & Order," "24," "Lost" and newcomers such as "Rubicon" and "Terriers" leaving behind empty space in a lot of DVRs.

At the same time, we couldn't get enough of reality TV, not just in the primetime line-up, but in our conversations around dinner tables and at office parties.

This was the year that former Alaska Gov. Sarah Palin launched a reality show, her daughter danced "With the Stars," Snooki went to court for "Jersey Shore" antics and the Salahis prepped for that now infamous White House state dinner on "The Real Housewives of D.C."

But while reality TV and its participants may get the attention with publicity-creating headlines and, in some cases, ratings, that doesn't mean the viewing public is ready for an all-reality diet just yet, said TVGuide.com's Mickey O'Connor.

"It's cyclical. If you go back and look at ABC's scheduling of 'Who Wants to be a Millionaire' four nights a week, there's probably an article posted around that time that [said] scripted TV is dead," he said. "But I do think that TV networks are getting smarter about marketing their reality shows .They're getting smarter about marketing the people who are on their reality shows as commodities, as celebrities."

Entertainment Weekly's Lynette Rice agrees that the recent TV season has been the exception and not the rule when it comes to reality TV, particularly on the big four networks (ABC, CBS, NBC and Fox).

"A lot of the new dramas that have come out haven't been worth our time. We've already seen a lot of shows canceled, like 'Lone Star' and 'Outlaw,' and 'My Generation,' which was just excrement," she said. "I don't think that reality will ever trump a good scripted drama. It's here to stay, it's not going away, and there's more of it than ever before, but no one's been able to come up with a huge replacement."

Enter a show such as "Dancing With the Stars." The primetime ABC program became the most-watched reality TV program this fall on the big four networks and the second-most watched overall, just barely falling behind "NCIS" on CBS. According to Entertainment Weekly, "DWTS" had 21.2 million total viewers from September 20 to November 28, while "NCIS" pulled in 21.3 million viewers in that same time period.

But of course, the "DWTS" juggernaut can, in part, be attributed to ABC's ingenious casting this season. If the network hasn't sent Bristol Palin a fruit basket yet, one surely must be on the way.

With Bristol, the dance competition received a lot of attention, and that attention fed on itself, Rice said. And then there were the stories about a voting conspiracy launched by Tea Partiers, which turned what some might have once viewed as a cheesy dance competition into must-see TV.

"Yes, ABC gets credit because that was phenomenal casting, but at the same time, it did really well also because everything else sucked," Rice noted. "Again, the networks had to ask themselves, 'What are we doing wrong in that people are still going to 'DWTS'?' "

That's not to say that TV in general has become a wasteland for strong scripts. They're there -- and they're also more likely to be found on cable.

When Bill Gorman of TVByTheNumbers.com thinks back on what stood out in 2010 in terms of top-notch programming, he points to cable shows as those that shone the brightest.

"In terms of the amount of scripted programming on television, there's massively more than there was 10 years ago, because more networks are doing original programming," Gorman explained. "[But] the one thing that jumps out this year to me is that there has been some success in cable with serial dramas that has not happened on broadcast. You had 'True Blood,' which was quite successful on HBO, and 'Walking Dead' on AMC was massively successful. Both of those were serial dramas that did really well."

For "Sons of Anarchy" writer/co-producer Chris Collins, the spotlight on reality TV doesn't worry him, although he said it does have something of a ripple effect on scripted drama, if only in development dollars.

"If reality TV or some version of it is succeeding, all of a sudden some company says, maybe this is a better way to go for us without having to spend a lot on scripted programming, then it impacts development dollars," he explained. "What's impacted this industry more, right now, is the success of certain types of scripted programming."

Shows such as Collins' "Anarchy" on FX and "The Walking Dead" are what "people in the industry are calling 'loud,' " he said. "Dramatically, you're offering that same sort of reactionary [programming], to a degree, and contention. It's programming that's in your face."

In fact, O'Connor said, viewers are more interested in "loud," elevated drama of any kind, be it from "The Real Housewives" or the housewives on "Mad Men."

" 'The Real Housewives' is not necessarily a show about benevolence ... it's about backstabbing, fights and deceptions," he said. "Some of the most interesting scripted programming has been, too --- secret identities, lying, doing drugs, cheating on your spouse. I do think that TV has gone after that kind of anti-heroic character."

So whether your anti-hero is Mike "The Situation" Sorrentino or Don Draper, there's room for both. Reality TV, with its "Teen Moms" and "Undercover Bosses," may have more of our attention for a season, but scripted drama is far from a dying art, EW's Rice said.

"If another great reality TV idea comes that's genius, we'll tune in to it, but I think that we still hunger for a great story," she added. "If the world starts to get to the point where viewers prefer reality over scripted, I think that's a sign of the apocalypse."