The man behind 'The Girl with the Dragon Tattoo' 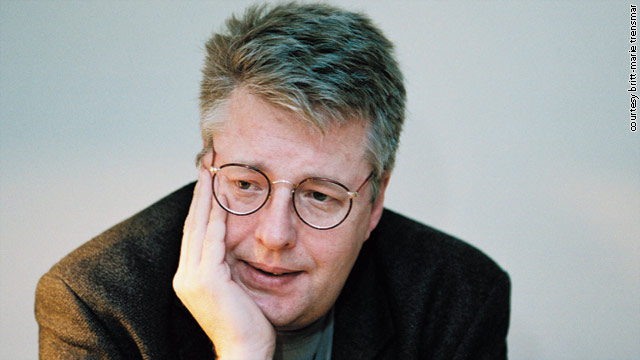 Stieg Larsson, pictured here during the year he died, worked on his dark trilogy during late-night writing binges.
STORY HIGHLIGHTS

(CNN) -- Stieg Larsson left behind a trail of intrigue that rivals the dark thrillers he created.

To his countrymen in Sweden, he was known as a rumpled, chain-smoking investigative journalist who risked his life exposing hate groups when he died suddenly in 2004.

Six years later, Larsson is an international star. The posthumous publication of his "Millennium" crime trilogy -- "The Girl With the Dragon Tattoo," "The Girl Who Played with Fire" and "The Girl Who Kicked the Hornet's Nest" -- has sold at least 40 million copies worldwide. And Sony Pictures plans an English-language adaptation of the Millennium trilogy, according to the U.S. publisher, Knopf.

Larsson's brand is poised to get bigger. Knopf is scheduled to release the English translation of the final Millennium novel, "The Girl Who Kicked the Hornet's Nest," in the U.S. on May 25; it's already out in Europe.

A Larsson biography, "The Man Who Left Too Soon," is due in June. The Swedish film version of "The Girl with the Dragon Tattoo" was just released to strong reviews in America. The Swedish versions of the final two Millennium films are expected in U.S. theaters later this year.

Larsson's legacy, though, is starting to resemble his trilogy -- it's become a whodunit. Some fans wonder if he was murdered. A former colleague publicly wondered if Larsson actually wrote his books.

Now there are rumors of a fourth, unfinished Larsson novel, hidden somewhere on a computer. Larsson's longtime partner, Eva Gabrielsson, is tangling with Larsson's family over control of the late author's estate. There are reports that she has Larsson's fourth book stored on a laptop in a safe.

Larsson had an air of mystery about him even when he lived, said Dan Lucas, who worked with Larsson at a Swedish news agency.

"Stieg was a very private person," Lucas said. "He held strong views on several subjects, but he wasn't the type of man who chatted about his family or about holiday trips. I think it was part of Stieg's character to be private."

He wasn't the type of man who chatted about his family or about holiday trips.
--Dan Lucas, a former colleague of Larsson

In this, Larsson shared similarities with perhaps his most singular creation, Lisbeth Salander, the heroine and central character in his trilogy.

The trilogy has been described as a Scandinavian ''Silence of the Lambs." Others describe it as "Nordic Noir." Salander seems central to the books' appeal.

She's the girl with the dragon tattoo, a genius computer hacker who teams up with a resourceful middle-aged journalist to take on a powerful, murderously corrupt Swedish family.

This modern-day Pippi, though, has multiple piercings, a photographic memory and inflicts horrific violence on men who brutalize women.

"She's this tiny character who is constantly taking on men who are bigger than her," Forshaw said. "She is a woman who knows how to stay ahead. And when she functions, boy does she function."

The righteous indignation that runs through Larsson's trilogy -- anger at men who brutalize women, disdain for corrupt industrialists and hate groups -- comes from Larsson's own political activism, Forshaw said.

"He was a man who thought the world could be better," Forshaw said.

Larsson learned that lesson from a tough grandfather who helped raise him in the forests of northern Sweden, Forshaw said. Larsson's grandfather was a communist who risked his life speaking out against the rise of Nazism and Hitler during the 1930s.

When Larsson became an adult, he risked his life for another cause. He founded the Expo Foundation in 1995 to counteract the growth of hate groups in Sweden.

He became such a formidable foe of hate groups that his life was under constant threat. Even if he went to a restaurant with his companion, "They would arrange it so both were looking at opposite entrances," Forshaw said.

He was a man who thought the world could be better.
--Barry Forshaw, Larsson biographer
RELATED TOPICS

"You couldn't work long at the agency before knowing what Stieg did on the side," Lucas said. "His phone number and address was not listed in the internal phone book. There were only a couple of bosses who had his number."

Yet there was another side to Larsson that most colleagues didn't know. He wanted to be a big-time thriller writer. He loved sci-fi and American detective novels, and he started writing his trilogy at night for pleasure and profit, Forshaw said.

"He saw them as a nest egg," Forshaw said. Larsson and his companion "were going to use the money to buy themselves a nice place. He was a canny, commercial guy."

But Larsson never lived to buy that nice place. He died of a massive heart attack at 50, shortly after delivering all three manuscripts to a publisher.

Though he's heard rumors that Larsson was murdered by hate groups, Forshaw doesn't believe them. He said Larsson was a workaholic who chain-smoked, drank coffee constantly and ignored pleas from his friend to slow down.

"He didn't seem to really be able to relax," Forshaw said. "He was always working on something."

Forshaw also rejects the claim that Larsson didn't write his trilogy. A fellow journalist who worked with Larsson in the 1980s said Larsson was a clumsy, amateurish writer who could not have written the Millennium trilogy.

But Forshaw includes several interviews from the author's former colleagues who say they recognized Larsson's distinctive voice in the books. One told Forshaw that she saw many of Larsson's "favorite words in the book, the same words that I always crossed out when we wrote together."

Forshaw said he believes that Larsson was confident enough in his skills to know his books were going to be popular. His publishers were excited about his manuscripts, and he was "quietly savoring" a new writing career, Forshaw said.