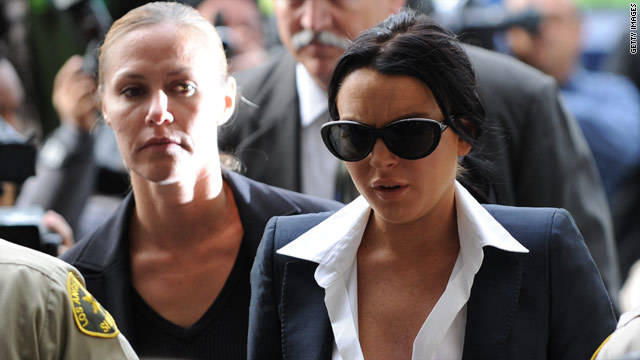 She left the courthouse more than two hours later wearing a SCRAM (Secure Continuous Remote Alcohol Monitoring) ankle bracelet and with an appointment to visit her probation officer on Thursday.

The judge's mood was a sharp contrast to her joking with reporters last October as she waited two hours for the 23-year-old actress to show up for a hearing.

Revel delayed a planned vacation so she could preside over Monday's hearing, made necessary by Lohan's failure to appear as ordered last Thursday.

Lohan's face showed visible stress after Revel ordered her to stay in the Los Angeles area until a probation revocation hearing on July 6 so she can submit to random drug tests.

Random drug testing was ordered because of previous evidence that Lohan was under the influence of cocaine, Revel said last week.

When defense lawyer Shawn Chapman Holley said the SCRAM ankle bracelet and drug tests would interfere with a movie shoot Lohan has schedule in Texas next month, Revel said that work must be delayed.

"It's going to be drug testing here," meaning in California, Revel said.

The SCRAM bracelet samples perspiration on the skin every half-hour to detect if the wearer has ingested any alcohol, according to an online fact sheet posted by its maker, Alcohol Monitoring Systems, Inc.

Lohan must also attend all of her weekly alcohol classes, unless the class interferes with her random drug tests, Revel said.

Revel said Lohan had the option of challenging the conditions, but after conferring with her client, Holley said she would accept them.

It was Lohan's alleged failure to attend those classes, ordered after a 2007 drunk driving conviction, that landed her back in court this month.

"Did she go to the funeral?" Revel asked.

"She did not," Holley answered.

Lohan's failure to show up for court as ordered last Thursday to determine if she had been attending weekly alcohol counseling sessions prompted the judge then to rule there was "probable cause to believe (Lohan) is in violation of probation."

Holley told the judge that Lohan was unable to catch a flight from France two days earlier because she lost her passport at the Cannes Film Festival.