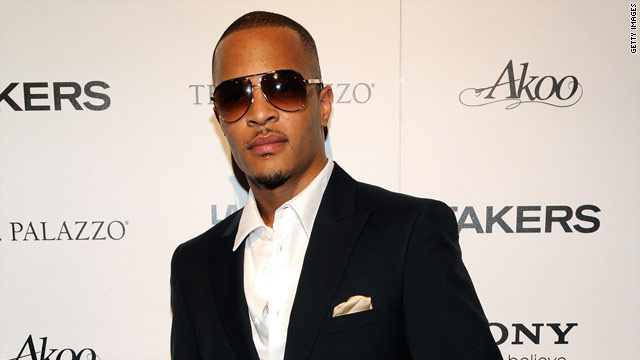 T.I., whose real name is Clifford Harris, and his wife, "Tiny" Tameka Cottle, were arrested on drug charges after a traffic stop on Sunset Boulevard in September.

The arrest and a failed drug test the next day resulted in a federal judge in Georgia ordering the rapper back to prison for 11 months for violating his probation from a weapons conviction.

Harris. 29, must turn himself in next week to begin serving his prison term next week for the probation violation.

Defense lawyer Steve Sadow told CNN the decision to drop the charges was "the right thing to do under the circumstances."

"Both his Los Angeles defense attorney, Blair Berk, and myself commend the Los Angeles district attorney's office for exercising its discretion to reject prosecution in light of the legal and factual issues involved," Sadow said.

An arraignment hearing had been set for next month, but the decision to reject charges against Harris will save Los Angeles taxpayers the expense of flying him from a federal prison in Georgia to California.

No decision has been made about the drug charges against Cottle, 35, the prosecutor's office said.

Harris acknowledged in federal court this month that he had a drug addition problem.

"I screwed up big time and I am sorry," Harris told U.S. District Judge Charles Pannell Jr. "I am sincerely sorry. I am scared that you will send me to prison."

"Mr. Harris has had the limit of second chances," Pannell said as he imposed the 11-month sentence.

Harris received an unusual plea agreement two years ago to resolve federal gun charges. Those charges followed his attempt to buy three machine guns in the parking lot of an Atlanta grocery store.

He served a year of house detention before he spent nine months in prison and three months in a halfway house.

The cornerstone of the plea deal was his community service which included the rapper speaking to young people about the importance of staying off drugs and out of trouble.

"He was supposed to be living what he was preaching," said U.S. Attorney Sally Yates.

Harris is an Atlanta-based rapper, music producer and actor. He is also the head of the Grand Hustle record label.