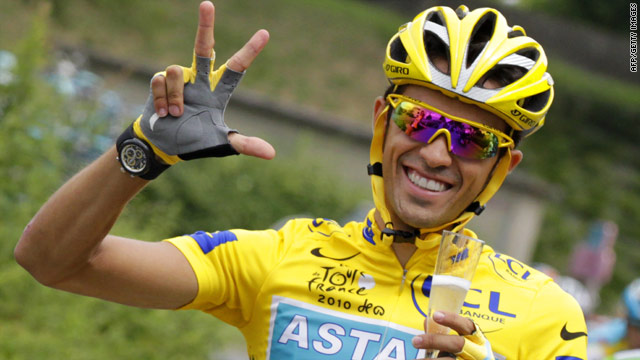 (CNN) -- Alberto Contador was crowned Tour de France champion for the third time on Sunday as Mark Cavendish won the final stage of cycling's premier event, which was delayed after seven-time winner Lance Armstrong's team were ordered to change their jerseys.

Contador had the customary winner's cruise into the Champs-Elysees in Paris, having taken a 39-second lead over Andy Schleck in what is the traditionally decisive penultimate stage on Saturday.

He was 81st in a 161-strong peloton behind Cavendish -- all credited with the same time of two hours, 42 minutes and 21 seconds -- with Armstrong 106th as he completed his final Tour in 23rd overall.

The 38-year-old finished more than 39 minutes behind Contador, his teammate at Astana last year, after suffering from crashes early on in the grueling 21-stage race.

It is a Tour in which I had a lot of pressure, especially physically as I was not at my best level
--Alberto Contador
RELATED TOPICS

"It is a Tour in which I had a lot of pressure, especially physically as I was not at my best level. It took a lot of confidence to face difficult situations," the 27-year-old Contador told the race's official website.

"Today is therefore a great relief for me, it is a moment that I feel like I've been liberated from all the pressure.

"The three wins are all very different. The first, in 2007, had something special, precisely because that was the first. Last year, the context was difficult and this made it difficult. And this year I have had difficult moments, but I could count on a strong team.

"I realize that each year I gain in experience. I know better manage a team throughout the race. Now I am happy to enjoy this victory and I'll take a good vacation."

British rider Cavendish triumphed in the closing leg of the three-week event for the second year in a row, his fifth stage win of 2010, but his late burst was not enough to deny Alessandro Petacchi the sprinters' title.

Petacchi finished second ahead of New Zealand's Julian Dean to become only the second Italian to win the green jersey.

"I'm disappointed this year not to win the green jersey. I set out to do so -- it was a target for this year -- but I had some bad luck in the first days and was out of the running," Cavendish said.

"But the team fought back, did our best and I lost it by 11 points. But we won five stages and we've got to be happy with this year's Tour."

They were made to take off special black jerseys worn to promote Armstrong's cancer charity during the neutral zone run ahead of the official start of the 102-kilometer stage from Longjumeau.

The peloton, which set a slow pace anyway, waited as the American and his teammates changed back into their regulation jerseys.