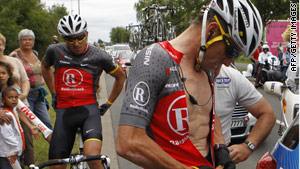 Lance Armstrong, right, puts on his team's official jersey Sunday after being ordered to remove an unapproved one.
STORY HIGHLIGHTS
RELATED TOPICS

The race was delayed 20 minutes while Team RadioShack changed out of its unapproved anti-cancer-themed attire, a move that the union says could have disrupted the televised coverage of the race.

"The UCI regrets that an initiative for a cause as worthy as the fight against cancer was not coordinated beforehand with the Commissaires and organisers of the event. This could have been done whilst remaining within the rules," the statement said in a press release Monday.

The union also commented on a recent Twitter post by Team RadioShack manager Johan Bruyneel, who said Sunday, "Now it's official! To be a race commisar, you don't need brains, but only know the rules," calling the online remarks "utterly unacceptable."

Armstrong and his team had planned to ride into Paris' Champs-Elysees finish on Sunday wearing black jerseys emblazoned with "28," which represents the 28 million people worldwide who have cancer. But officials told the team to change back to its official jerseys.