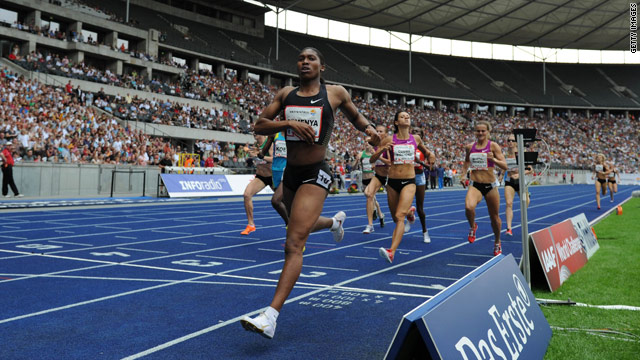 (CNN) -- South Africa has named Caster Semenya, the women's world 800 meter champion, in their squad for the 2010 Commonwealth Games which will take place in New Delhi, India.

The selection -- which was confirmed on the official website of the South African Sports Confederation and Olympic Committee (SASCOC) -- follows Semenya taking three wins from all three of her recent comeback races following her return to the track in July.

Prior to this, the 19-year-old had been forced into an 11-month hiatus from competition after the International Association of Athletics Federations (IAAF) banned her following a urine sample test which revealed high levels of testosterone.

The event will mark Semenya's first participation in international competition since her ban was lifted following gender tests.

"I'm very happy to see the return of Caster Semenya to duty for South Africa. We have observed her progress closely since the IAAF cleared her to run and it's good to hear her say that she's focusing all her efforts on the Commonwealth.

Most of us just feel that we are literally running against a man
--Diane Cummins, Canadian athlete
RELATED TOPICS

"The fact that she's unbeaten in her three races thus far and has improved her time on each occasion is good news for our medal effort in New Delhi," SASCOC president Gideon Sam told the website.

Semenya clocked a time of 1:59.90 at the ISTAF meeting in Berlin at the weekend which, though four seconds short of her 1:55.45 personal best, was enough to draw criticism from fellow runners.

Diane Cummins of Canada, Great Britain's Jemma Simpson and Elisa Cusma Piccione of Italy all questioned whether should be allowed to continue to compete in the sport.

"Unfortunately for Caster, she's grown up in an environment that is complicated not just for her but for human science. Basically, is she man, is she lady? What constitutes male, what constitutes female?"

Cummins added: "Even if she is a female, she's on the very fringe of the normal athlete female biological composition from what I understand of hormone testing. So, from that perspective, most of us just feel that we are literally running against a man."

Michael Seme, Semenya's coach, told reporters that the negative comments would not affect his runner.

"It's up to them to say and do what they want to. For us we don't say anything. As long as the organizers of these meetings invite us, there is no problem," he said.

The Commonwealth Games take place in the Indian capital from 3-14 October.

The Jamaican sprinter -- who has his own clothing line with the company --renewed his contract which Puma described as "by far the largest ever given to a track and field athlete" and which puts "Bolt among the top-earners across all sports."