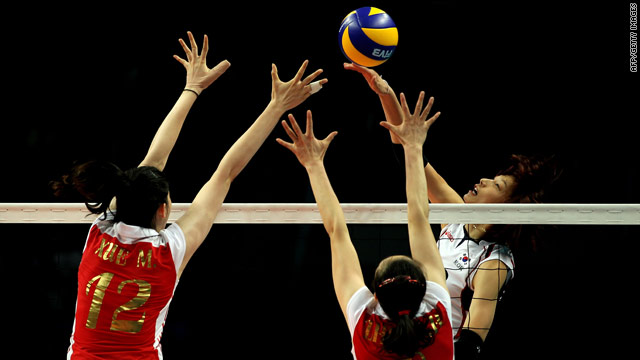 (CNN) -- China ended the Asian Games in glorious style on Saturday, taking the final gold medal at stake in the women's volleyball competition in Guangzhou.

The hosts came from two sets down to beat South Korea 3-2 in a thrilling final and take their seventh volleyball title.

Earlier in the day Zhou Chunxiu added another gold to the hosts record-breaking medal haul when she successfully defended her women's marathon title, finishing in a time of two hours 25 minutes.

The final day's results took China's gold medal haul to 199 and their overall tally to 416, beating theirs and the Games' previous best of 183 gold medals set at Beijing in 1990.

"The reason why we have been largely successful is related to the rise of our nation, along with the constant rise of China's economy and our comprehensive national strength. This medal haul again can represent a major achievement in our preparations for the London Olympic Games," China's vice minister of sport Duan Shijie said, AFP reported.

South Korea finished in second place with 232 medals, 76 of them gold.

China's perennial rivals Japan only managed 46 golds in an overall medal total of 216, which saw them finish in third place.