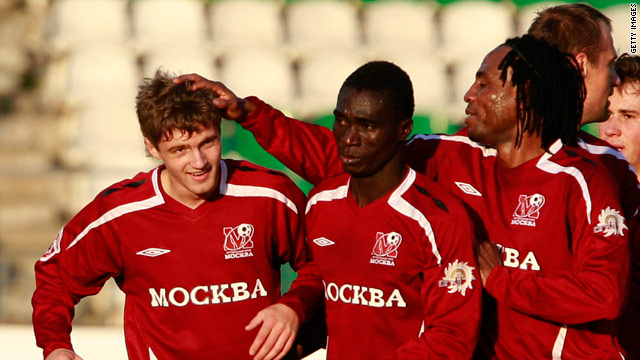 FC Moscow's players have been told to find another club after their team was withdrawn from the Russian Premier Liga.
STORY HIGHLIGHTS

(CNN) -- FC Moscow have pulled out of the 2010 Russian Premier Liga after the club's owner withdrew financing of the club.

After days of speculation Sports Projects, a subsidiary of the club's owners Norilsk Nickel, confirmed on Friday the company could no longer justify financing the club.

The club's future now looks uncertain, with lower league football or even closure a possibility.

Meanwhile, Montenegrin coach Miodrag Bozovic, his staff and players are expected to be told to find new employers.

"In my opinion the decision has been taken because, from the point of view of the club's location and name, it does not fit in with the priorities of Norilsk Nickel, the majority of whose workforce are based in Russia's polar regions and the Krasnodar territory," Sports Projects general director Leonid Isakovich told reporters.

"Our decision has been influenced by a lack of support from the Moscow authorities. We have made several attempts to find mutual cooperation, but were unable to find an understanding."

The club passed the licensing requirements to compete in the Premier Liga on Thursday, offering a glimmer of hope.

But the growing speculation surrounding Norilsk Nickel's continued backing led to a group of fans congregating at the city's Sheremetyevo airport to lobby support from national team coach Guus Hiddink, who was returning to the country to meet new Russian Football Association president Sergei Fursenko.

FC Moscow were founded in 1997 under the name Torpedo-ZIL. They finished the 2009 season in sixth place, narrowly missing out on a Europa League spot, and have reached the quarterfinals of the Russian Cup, with ties due to be played in April.

Former Russian champions Alania Vladikavkaz, who finished third in Division One, are now expected to take FC Moscow's place in the top flight.

FC Moscow may not turn out to be the Premier Liga's only casualty this season. Samara-based side Krylya Sovetov, who are heavily in debt and are reported to owe some of their players wages and bonuses going back to August, have until February 15 to clear their debts and satisfy the licensing requirements for the coming season.