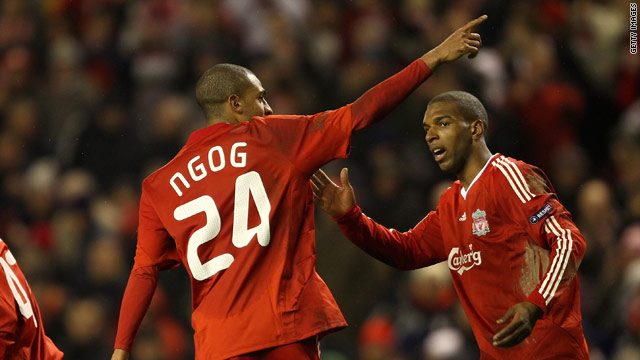 After their Champions League exit, Liverpool are keen to add European silverware this season, but will need to be more convincing in the return leg in Bucharest.

Ngog's header gave Rafa Benitez's men a useful cushion in the last-32 tie but it was a largely disappointing performance.

Liverpool might have taken the lead inside a minute but captain Steven Gerrard missed the opportunity.

But the win was only Liverpool's third in nine European fixtures since they thrashed Real Madrid 4-0 in the last 16 of the Champions League 11 months ago.

Zoltan Gera fired the opener for Fulham after just two minutes before Luiz Adriano scored the equalizer for the visitors and the second seemed imminent as the Ukrainians dominated.

But Fulham rallied and striker Bobby Zamora scored the winner just after the hour with a thumping shot to give them a slender advantage for the return leg.

"We have got something to fight for now, it will be a great game over there," Fulham midfielder Danny Murphy told ITV Sport after the win.

A clash of former European champions saw Juventus win 2-1 away to Ajax Amsterdam as Brazil's Amauri scored both goals for the Italians.

Miralem Sulejmani put the home side ahead in the 16th minute, but Amauri soon leveled.

His second just before the hour mark but Juve must do without Hasan Salihamidzic next week as he was shown red in stoppage time.

We have got something to fight for now, it will be a great game over there
--Fulham's Danny Murphy

Djibril Cisse scored the winner in the 89th minute as Panathinaikos grabbed a stunning 3-2 win over AS Roma.

The Greeks were trailing 2-1 with six minutes left when substitute Lazaros Christodoulopoulos scored the equalizer before Cisse's late header gave them a shock win.

In other key ties, Kader Keita scored a late equalizer to earn Galatasaray a 1-1 draw against Atletico Madrid, who had taken a 22nd-minute lead through Jose Antonio Reyes' stunning free-kick.

But favoured Spanish side Valencia were beaten 1-0 by Club Brugge in Belgium ahead of the second leg.