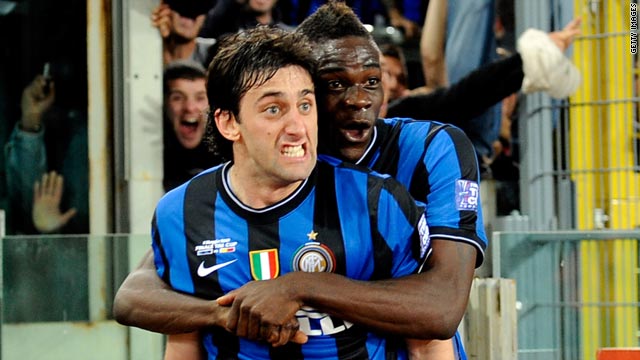 (CNN) -- Inter Milan took the first step toward becoming the only Italian team to clinch a hat-trick of titles in one season by beating 10-man rivals Roma 1-0 in the final of the Italian Cup on Wednesday night.

Diego Milito's first-half goal was enough to separate the two teams, who are only two points apart in the race for the Serie A title with two games to play.

The Argentina forward fired his 26th goal this season five minutes before halftime to give Jose Mourinho his second trophy since taking charge of the Italian league leaders two years ago.

Milito ran onto a fine pas from midfielder Thiago Motta, who made some amends for his red card in the second leg of the Champions League semifinal against Barcelona, and shrugged off a challenge to blast a shot past Roma goalkeeper Julio Sergio.

Roma, who won the cup in 2007 and 2008 but saw city rivals Lazio lift the trophy last season, were reduced to 10 men with two minutes to play when veteran striker Francesco Totti received his second booking in the space of 25 minutes.

Totti, usually the team's captain, had come on as a substitute at halftime.

Mourinho had to make an early change when Dutch midfielder Wesley Sneijder went off injured in the fifth minute, to be replaced by young striker Mario Balotelli.

Milito had the ball in the net in the 17th minute, but it was ruled out for offside.

Meanwhile, Marseille won the French league title for the first time in 18 years with a 3-1 victory against Rennes on Wednesday night.

Lille claimed second on goal difference with a 2-0 win at Toulouse, while Auxerre lost 2-1 at fourth-placed Lyon.