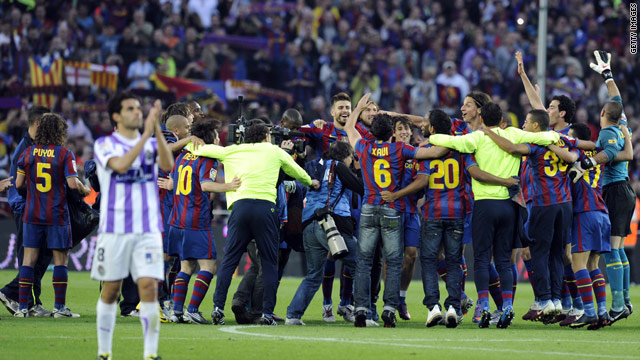 (CNN) -- Lionel Messi scored his 33rd and 34th goals of the season as Barcelona crushed Valladolid 4-0 to retain their Spanish Primera Liga title by three points from Real Madrid, who were held 1-1 at Malaga on Sunday.

The 22-year-old Messi put the icing on the cake of a memorable campaign for him personally, helping Barca finish the season on 99 points, the most points gained in Spanish league history.

With arch-rivals Madrid breathing down their necks, just a point separated the two sides going into the final match of the season, Pep Guardiola's side knew that only a victory would guarantee their fourth league title in six seasons.

And they were handed the perfect start when visiting defender Luis Prieto managed to slice Pedro's 27th-minute cross into his own net.

Pedro was instrumental in Barca's second goal four minutes later, sliding the ball through the goalkeeper's legs after latching onto Messi's pass.

Argentine maestro Messi then took over. He netted his first -- and Barca's third -- on the hour mark when tapping home after Yaya Toure's powerful run had split the Valladolid defence.

The scoring was completed with 15 minutes remaining when Messi fired home after against being set-up by Toure.

Real Madrid had a great season and made life tough for us but we fought hard to win this title with a huge points tally.
--Carlos Puyol

Speaking to reporters after the match, Barca captain Carlos Puyol said: "Real Madrid had a great season and made life tough for us but we fought hard to win this title with a huge points tally.

"It is really nice to celebrate this title in front of our fans. We have had some difficult moments and they really helped us get through them."

The victory also meant Real's result became redundant, although their failure to win now increases the pressure even further on coach Manuel Pellegrini.

Pellegrini's side fell behind on nine minutes when Sergio Duda finished fired Malaga ahead, although Dutchman Rafael van der Vaart earned the visitors a point with a superb turn and strike.

Meanwhile, Valladolid's defeat means they join Xerez and Tenerife in being relegated to the second division -- while Malaga and Racing Santander both survive the drop.