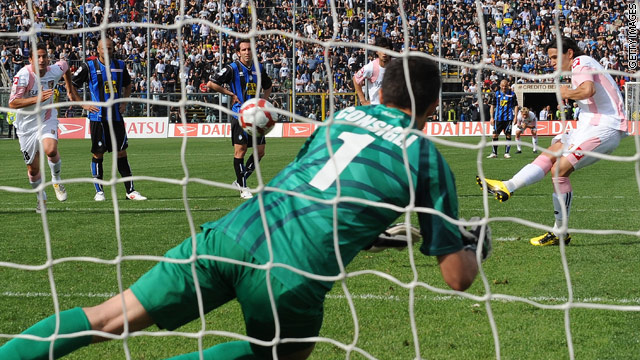 (CNN) -- Footballers taking penalties at next month's World Cup finals in South Africa will no longer be able to stop at the end of their run up to try and trick the goalkeeper.

The rule change is a reaction to the growing number of players, particularly in South America, now using so-called feints to deceive the opposition.

In an announcement made at a meeting of the International Football Association Board (IFAB), chaired by FIFA president Sepp Blatter on Tuesday, those who halt just before kicking the ball will receive a yellow card for "unsporting behavior".

"Feinting in the run-up to take a penalty kick to confuse opponents is permitted, however feinting to kick the ball once the player has completed his run-up is now considered an infringement," FIFA secretary general Jerome Valcke told a press conference held at the organizations headquarters in Switzerland.

Players may also be forced to retake the penalty if the ball goes into the net.

The amendment to the penalty rule will be implemented on June 1, just 10 days before the start of the World Cup. But Valcke insists this is enough time.

"We will work with the players and the referees to make sure they understand exactly what the new rule is," he added.

Meanwhile the IFAB have also decided to grant further powers to the fourth official.

Normally over seeing substitutions, off-pitch incidents and match management, the fourth official will now be able to assist the referee with issues arising on the pitch.

"Today he is as important as the other assistants or the referee," Valcke added.

The IFAB also agreed to extend the Europa Liga experiment of having four assistant referees on the pitch as a replacement for goal line technology.

Football leagues across the world will now be able to try out the idea over the next two seasons before any decision on whether it is made compulsory are made.