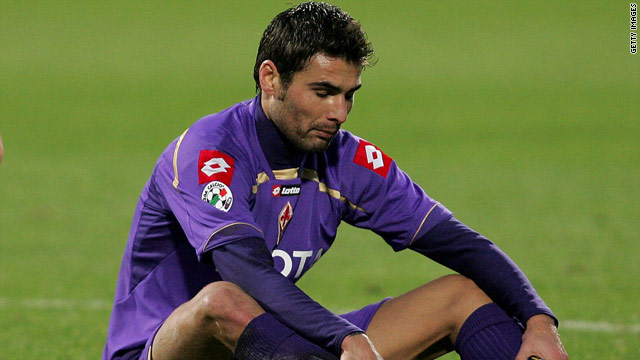 Adrian Mutu had a miserable season in London before his Chelsea career ended in disgrace.
STORY HIGHLIGHTS
RELATED TOPICS

(CNN) -- Romanian striker Adrian Mutu has been ordered to pay English Premier League champions Chelsea a record $20.7 million after losing his final appeal in a five-year case relating to his positive cocaine test.

The Swiss Federal Court upheld the decision of FIFA and the Court of Arbitration for Sport (CAS) in ruling that the player must compensate his former club for breach of contract.

Mutu, 31, who now plays for Fiorentina, was sacked by the London team in 2004 after testing positive for the drug.

He was given a seven-month worldwide ban from football before resurrecting his career in Italy with Juventus and then Fiorentina.

Chelsea's legal case was based on the fact that they paid £15 million to sign the player from Parma in 2003 and he had four years remaining on his contract when he was banned.

A statement from the Swiss court said:"The Swiss Federal Tribunal has rejected the appeal filed by Adrian Mutu against a sentence by Cas.

"The Cas had sentenced the professional Romanian footballer to paying a sum of more than 17 million euros to his previous employer, Chelsea Football Club Limited."

Mutu is currently serving a nine-month drug ban after testing positive for an anti-obesity drug in January.

Chelsea have not commented on the decision.