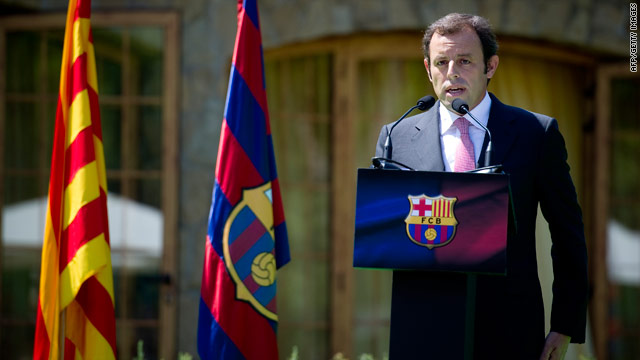 A new audit by accounting firm Deloitte revealed that the Catalan giants actually made a loss of €77.1 million ($100 million) for the 2009-10 season, Faus said in a statement on the Barca website on Tuesday.

The previous board had announced the club was €11 million ($14 million) in profit up to the end of last month, when president Joan Laporta stood down to be replaced by Sandro Rosell.

"The accounts submitted on June 30 do not reflect the true picture of the club," Faus said.

There is a structural problem. The sporting excellence in the last few years has not been reflected in economic excellence
--Javier Faus
RELATED TOPICS

Deloitte's audit showed that income had been overstated by $47 million and expenses understated by $61 million.

With an $89 million operating loss, Deloitte also found $14 million in further financial expenses to be countered by $3.9 million after-tax profits.

Part of the problems lay in the bankruptcy of broadcaster Mediapro, with Barca claiming the club is owed $49 million by new rights-holder Sogecable.

The left-back, 19, has agreed a three-year contract, having made only one first-team appearance as a substitute in April after coming through the youth ranks.

He follows veteran stars Raul and Guti in departing the Bernabeu this week.