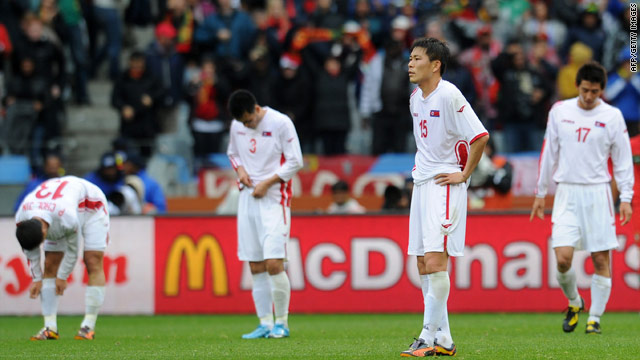 North Korea's players suffered an embarrassing 7-0 defeat by Portugal at the World Cup in South Africa in June.
STORY HIGHLIGHTS

The North Koreans, playing at the tournament for the first time since 1966, suffered an embarrassing 7-0 thrashing by Portugal and also lost to five-time world champions Brazil and the Ivory Coast.

The players, except for Japan-born Jong Tae-se and An Yong-hak, were summoned to a large auditorium on return to Pyongyang last month and subjected to a six-hour interrogation, according to Radio Free Asia.

Coach Kim Jong Hun was expelled from the Workers' Party and forced to do hard labor as punishment, sources told the station. He was reportedly accused of betraying Young Gen. Kim Jong Un, the anointed heir of the regime's longtime leader Kim Jong-Il.

The first step is the federation and we'll see what the answer will be, and then we can elaborate on that
--Sepp Blatter
RELATED TOPICS

FIFA president Sepp Blatter told a press conference in Singapore on Wednesday that the governing body had made contact with the North Korean Football Association.

"[We contacted them] to tell us about the election of a new president, and if it is true, the allegations made by the media that the coach and some players have been condemned or punished," Blatter said in quotes carried by the UK Press Association.

"The first step is the federation and we'll see what the answer will be, and then we can elaborate on that."

Blatter said FIFA, which has strict rules about no government interference in member associations' affairs, was wary of making an official statement about the reports.

"We once had a case in another country where it was said players were also condemned and under physical pressure, and we sent someone and it turned out not to be true," he said in quotes carried by the AFP agency.

"So let's see what we hear before we make an official statement."

Blatter, who is in Singapore for the Youth Olympic Games' football tournament, also confirmed that the International Football Association Board would be discussing the possible introduction of goal-line technology at its meeting in October.

The issue came to a head again at the World Cup, where England had a goal wrongly disallowed against Germany and Argentina were awarded an offside goal against Mexico.