Cole sees red as Liverpool and Arsenal draw at Anfield 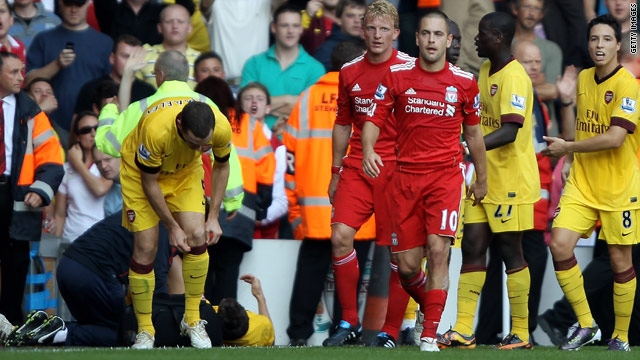 (CNN) -- Liverpool new boy Joe Cole was sent off for the first time in his professional career in a 1-1 draw against Arsenal in their English Premier League opener on Sunday at Anfield.

Despite being down to 10 men, Liverpool took a 46th minute lead through David Ngog, but were denied victory by a Pepe Reina own goal in injury time.

Cole, who joined Liverpool after being released by champions Chelsea, was sent off for a two-footed lunge on Arsenal defender Laurent Koscielny just before half-time of the heavyweight encounter.

Referee Martin Atkinson had no hesitation in giving Cole his marching orders as Koscielny, a summer capture by Arsene Wenger from Lorient, appeared to be seriously injured by the scything challenge.

But he came out for the second half to ironic cheers from the home fans, who had the last laugh when Koscielny was himself sent off for a second yellow card on the stroke of the final whistle.

Arsenal had the better of a cagey first half and with Liverpool down to 10 men were expected to take advantage, but fell behind straight after the break.

Javier Mascherano, who is set to leave Liverpool, played in Ngog who crashed the ball past Manuel Almunia at his near post and high into the net.

Liverpool fans were cheered by the second half appearance of substitute Fernando Torres, but he had few glimpses of goal as Arsenal pressed for an equalizer.

But soon afterwards the Spanish international was shaking his head after an uncharacteristic error gifted Arsenal their equalizer.

Under challenge from Marouane Chamakh, Reina dropped the ball but appeared to have got away with his mistake until the ball hit the post and he fumbled the rebound, allowing it to cross the line.

There was still time for Steven Gerrard to force Almunia into a fine save from a free kick and for Koscielny to be booked twice, the second for deliberate handball, to be shown a late, late red.

New Liverpool manager Roy Hodgson told Sky Sports that he was a "little bit disappointed," that his team had not held out for three points but hailed his side's resilience.

"It was a remarkable performance to have come so close to victory after playing all of the second half with 10 men," he added.