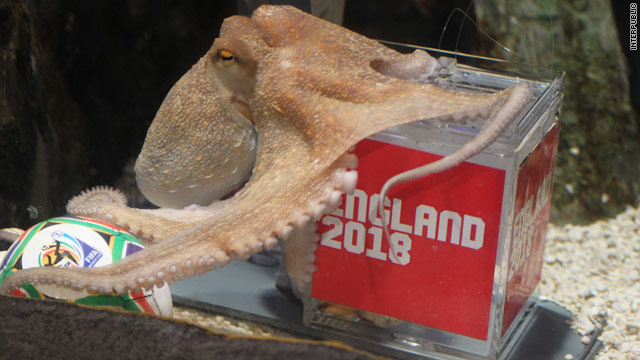 Paul the Octopus is returning to his native England to boost his country's ailing bid to stage the 2018 World Cup.
STORY HIGHLIGHTS

(CNN) -- He made his name predicting Germany's 2010 World Cup results, but now Paul the Octopus is returning home to help England's bid to stage the 2018 tournament.

England's campaign came off the rails in May when former Football Association chariman David Triesman was forced to stand down after being secretly taped accusing Spain and Russia of bribing referees.

His comments put a big dent in the considerable goodwill that had been built by the addition of soccer superstar David Beckham to the campaign team in 2009.

Now Paul, who was hatched at an English aquarium in 2008, is lending his particular talents to the bid despite having retired from psychic predictions.

With his predicting days behind him, the England 2018 campaign is something we are sure Paul feels passionately about
--Nicola Hamilton
RELATED TOPICS

"Paul has spent the last two years of his life in Germany, but he is definitely a proud Englishman and is therefore delighted to put his support behind England 2018," Weymouth Sea Life Center manager Nicola Hamilton said on Wednesday.

"We have had a number of football approaches from around the world but Paul was only ever going to choose his homeland."

The cephalopod correctly predicted the outcome of eight consecutive World Cup matches, dooming Germany's hopes when he plumped for Spain in the semifinal and then also in the final.

He has since signed book and merchandising deals and is set to appear in a film, all of which will help to raise funds for a sea turtle rescue center on the Greek Island of Zakynthos -- which will also receive a donation from the England 2018 team.

"With his predicting days behind him, Paul is now concentrating on a number of new projects and the England 2018 campaign is something we are sure he feels passionately about. Becoming an official ambassador for the bid is an honor for Paul and everyone at the Sea Life Center," Hamilton said.

The England bid is one of five seeking to host the 2018 tournament and one of eight hoping to stage the 2022 event, with the decision to be made by world ruling body FIFA in December this year.