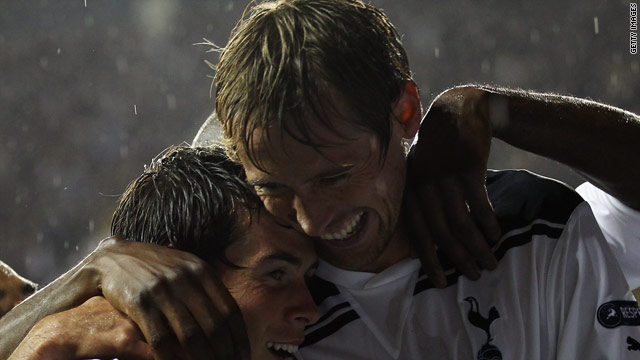 A headed goal from the lanky forward after just four minutes boosted the confidence of the London side, who trailed their Swiss rivals 3-2 after the first leg in Berne.

Fellow England international Jermain Defoe doubled the lead with just over half an hour gone with a powerful left-foot shot before Crouch bagged his brace from a corner with thirty minutes remaining.

The 29-year-old sealed the 4-0 victory by converting from the penalty spot on 78 minutes after Spurs defender Gareth Bale was brought down in the box by Senad Lulic, who was red-carded for the foul.

"It was all about last season's hard work ... and coming out tonight and making sure we got the result," Crouch told British broadcaster ITV.

"We want massive games - Inter Milan and Real Madrid coming to [our home stadium of] White Hart Lane. You don't know how good you are until you play against the best so we're looking forward to it," Crouch added.

Elsewhere, in Europe Auxerre of France fought back from a 1-0 first-leg defeat to beat Russia's Zenit St. Petersburg 2-1 on aggregate to complete their successful bid for group-stage qualification, thanks to goals from Cedric Hengbart and Ireneusz Jelen.

FC Copenhagen qualified for the group stages for the second time on away goals, after the Danes 1-0 home win against Rosenborg of Norway left the teams level 2-2 on aggregate after two legs. Sölvi Ottesen header was enough to end Rosenborg's 31-match unbeaten run of 2010.

Dutch side Ajax battled through a tough draw with Dynamo Kiev by winning 2-1 in Amsterdam. Goals from Luis Suarez and Mounir El Hamadaoui punished a profligate opposition, whose only consolation was an Andriy Shevchenko penalty, to cap a 3-2 aggregate win.

The draw to decide who will play who in the group stages takes place on Thursday in Monaco.