Favre to meet with NFL official over conduct investigation 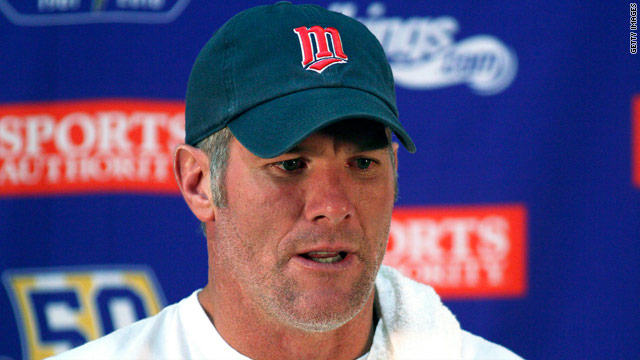 NFL legend Brett Favre has been embroiled in a scandal about messages he allegedly sent to a model.
STORY HIGHLIGHTS

(CNN) -- Minnesota Vikings quarterback Brett Favre will meet this week with an NFL official as part of the league's investigation into allegations that he sent sexually explicit messages to women, an NFL spokesman said Monday.

"It's no secret," NFL spokesman Greg Aiello said. "Any time you review a matter like this, you're going to talk to the person involved. What we've said is, 'Yes, we will be interviewing him as part of the process.' "

Aiello said the meeting with Favre would not include Commissioner Roger Goodell, but the spokesman would not divulge with whom or where the meeting was to take place. "We don't generally provide these kind of details," Aiello said.

Asked Sunday what he expects to come out of the meeting, Favre said, "I don't expect anything. As I said last week, during the week, tonight, I'm concerned about the next game. I'll let that take its course."

Sunday's news conference came after Favre led the Vikings to a 24-21 victory over the Dallas Cowboys, going 14 for 18 with 119 yards, one touchdown and one turnover.

The claims were first published by the sports website Deadspin.com, which has posted nude pictures, text and voice messages it alleges he sent to a model and former television host who worked for the New York Jets in 2008.

The Jets have given National Football League officials all the information they have regarding the incident, a team spokesman said last week.

Jesse Derris, a spokesman for the Jets, told HLN's "Prime News" that the team has no role in the allegations against Favre, who played one season in New York and now plays for the Minnesota Vikings.

Favre, who has been married for 14 years, has had no public comment on the allegations. He signed with the Minnesota Vikings in August 2009 after emerging from retirement for the second time in as many years.

Deadspin first reported in August that Favre sent text messages, left voice mails and sent pictures of himself naked from the waist down to Jenn Sterger, who worked as a sideline personality and host for the Jets at the time. It also published what it said were excerpts from the messages.

Afterward, Deadspin reported that a second woman had come forward to allege that she had received other lewd messages from the quarterback and that a third woman, whom the site did not identify, had received similar messages.

The site reported the two women were massage therapists hired by the Jets and identified them only by pseudonyms.

Derris said the therapists were hired for two days in the team's 2008 training camp and would not confirm whether they had any direct contact with Favre.

CNN could not independently confirm whether the voice in the recordings belongs to Favre or whether he sent the notes. Sterger's representatives have declined comment.

A.J. Daulerio, Deadspin's editor-in-chief and author of the Favre stories, told CNN last week that no one from the NFL has contacted him about an investigation into Favre. He acknowledged that third-party sources were paid for the story about Sterger and that he could not say definitively that the messages or photos the site posted came from the 41-year-old quarterback.

Favre played most of his career with the Green Bay Packers, leading the team to a Super Bowl title in 1997. He was traded to the Jets after the 2007 season.