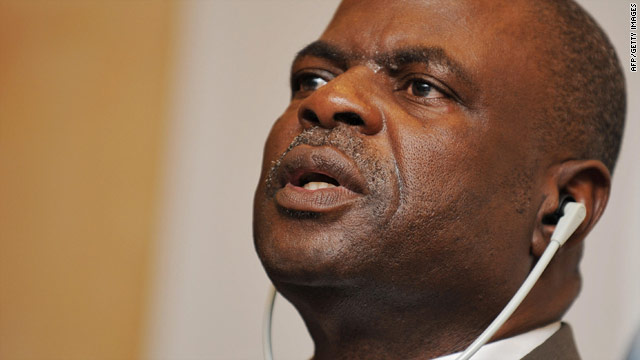 Amos Adamu is accused of asking undercover reporters for $800,000 to secure his vote in World Cup bidding process.
STORY HIGHLIGHTS

(CNN) -- Soccer's governing body has provisionally suspended two of its delegates who were accused of offering to sell their votes to countries bidding to host the 2018 World Cup.

FIFA announced on Wednesday that executive committee members Amos Adamu and Reynald Temarii have been banned from all football-related activities ahead of a further hearing next month.

Fellow FIFA officials Slim Aloulou, Amadou Diakite, Ahongalu Fusimalohi and Ismael Bhamjee have also been provisionally suspended in relation to an alleged breach of rules of the bidding process.

A final decision should be made before the 24-strong executive committee's December 2 vote on which nations will host the 2018 and 2022 tournaments.

FIFA's ethics committee will also open an investigation into possible collusion between bidding countries for the two events -- which is forbidden -- at its mid-November meeting.

"It is a sad day for football," FIFA president Sepp Blatter told reporters in Zurich.

Our society is full of devils, and these devils you find them in football. We have to fight for fair play
--FIFA president Sepp Blatter
RELATED TOPICS

"As the president of FIFA I appeal to and I expect all members not only of the FIFA executive committee but all members of the FIFA family to behave in an honest, sincere and respectful manner because football is based on discipline, respect, fair play and solidarity."

Nigerian Adamu and Temarii of Tahiti were exposed by an investigation by Britain's Sunday Times newspaper.

The video evidence showed Adamu asking for $800,000 from reporters posing as U.S. businessmen in return for supporting an American bid for 2018.

The U.S. has since withdrawn from the running in order to focus on its bid to stage the 2022 event, meaning a European nation will be host four years earlier.

Temarii, president of the Oceania Football Confederation, was accused of asking for funds to finance a sports academy.

"The decision to provisionally suspend these officials is fully justified and should not be put in question," FIFA ethics committee chairman Claudio Sulser said.

"The evidence that has been presented to us today has led us to take this provisional measure, as we considered that the conditions were definitely met to take this decision and we deem that it is crucial to protect the integrity of the 2018 and 2022 FIFA World Cup bidding process.

"We are determined to have zero tolerance for any breach of the code of ethics."

Meanwhile, goal-line technology could be introduced next year after football's rule-making body announced on Wednesday it would vote on the matter in March.

The International Football Association Board has set the guidelines for companies wanting to present their technology to FIFA, which must be done by the end of November to be considered.

FIFA's website said there will be a testing period ahead of the IFAB's annual general meeting on March 4-6.

The IFAB, which includes representatives from FIFA and the English, Welsh, Scottish and Northern Irish associations, met in Cardiff on Wednesday.

It released a statement saying that any goal-line technology under consideration would "apply solely to the goal line, and only to determine whether a goal has been scored or not."

FIFA dismissed the need for such technology seven months ago despite the uproar caused by France's controversial World Cup playoff win over the Republic of Ireland.

However, two controversial incidents at the 2010 World Cup in South Africa forced FIFA president Sepp Blatter to put the matter back on his agenda.

England had a Frank Lampard goal not awarded in a second-round defeat by Germany, while Argentina should have had a Carlos Tevez effort ruled out against Mexico.

Meanwhile, FIFA will make a statement later on Wednesday following a meeting at its headquarters to discuss allegations that two of its delegates had offered to sell their votes to countries bidding to host the 2018 World Cup.