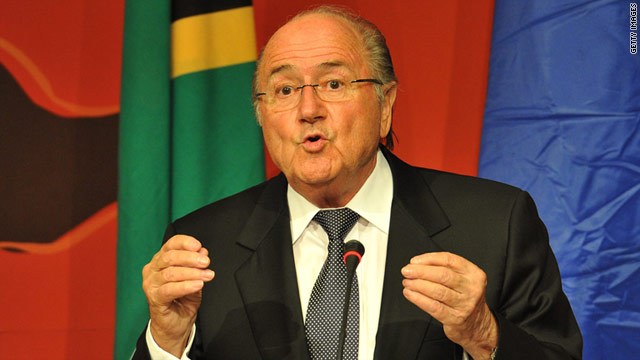 (CNN) -- Gay basketball star John Amaechi has criticized the head of soccer's ruling body for his comments about homosexuals planning to attend the 2022 World Cup in Qatar.

FIFA president Sepp Blatter was unable to keep a straight face when asked at a press conference in South Africa what to advise gay people who hope to go to the Arab emirate.

The mainly Muslim country, which will host the tournament for the first time, forbids same-sex relationships by law.

"I would say that they should refrain from sexual activities," Blatter answered on Monday, after a long pause.

"We are living in a world of freedom and when the World Cup will be in Qatar, this will be in 2022. And you can see in the Middle East the opening of this culture. It is another culture because it is another religion, but in football we have no boundaries."

Le Saux on homophobia in football

However, Amaechi -- who became the first NBA basketballer to reveal he is gay after retiring in 2007 -- accused the 74-year-old Blatter of showing "archaic, Neanderthal ignorance" towards the world's lesbian, gay, bisexual and transgender community.

"The statements and the position adopted by Sepp Blatter and FIFA regarding LGBT fans who would pay the enormous ticket and travel prices to attend the World Cup in 2022 should have been wholly unacceptable a decade ago," the U.S.-born British citizen wrote on his website.

With little more than an afterthought, FIFA has endorsed the marginalization of LGBT people around the world
--John Amaechi
RELATED TOPICS

"Instead, with little more than an afterthought, FIFA has endorsed the marginalization of LGBT people around the world. If sport cannot serve to change society, even temporarily during the duration of an event like the World Cup, then it is little more than grown men chasing a ball and we should treat it as such."

Amaechi said Blatter's comments were more damaging than they may have appeared at face value.

"Blatter's words aren't really about sex, as I can't imagine that many gay football fans would be bold enough to do it in public in Qatar. Rather, what he is really saying is 'Don't be camp, don't hold hands, don't look into each other's eyes, don't book rooms with one bed, don't have candle-lit dinners in the restaurant...' and on and on," he said.

"He's really saying don't even 'look' gay, re-closet yourself and pretend the ties and love and affection you have for your partner or even some random bloke you might meet on your travels are gone for the whole time you are in Qatar."

However, Blatter insisted that gay people would have no such problems in Qatar in 2022.

"I think there shall not be any discrimination against any human beings on this side or that side -- or left or right or whatever," he told reporters.

"And we don't want to have any discrimination. So you can be assured that ... if people want to watch a match in 2022 I am sure they will be admitted to such matches.

"What we want to do is open this game to all people to all cultures, and this is what we are doing in 2022."

Blatter was in South Africa to launch a legacy trust of $100 million to be distributed in the country after it became the first on the continent to host a World Cup earlier this year.

Of that, $80 million will go to social community projects while the rest was given to the South African Football Association in the build-up to the tournament.

"When I arrived back in South Africa, I saw excited people shouting, 'Welcome back, welcome back'. This to me shows that the spirit of the World Cup is still alive in this country," Blatter said.

"Now we go to the East of Europe to Russia where the World Cup has never been. Later on, we go to the Middle East. The World Cup must go to where it can improve social conditions and make a difference.