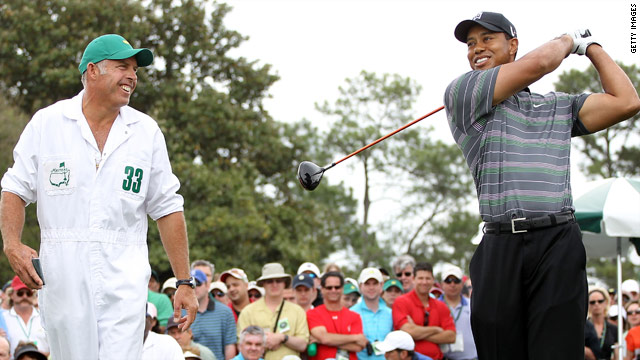 Tiger Woods jokes with his caddie Steve Williams on the first tee at Augusta.
STORY HIGHLIGHTS

(CNN) -- Fred Couples led a crowded field after the opening round of the Masters, but all eyes were on Tiger Woods, who trailed by just two strokes.

Woods finished Thursday 4-under par, his best opening round score at the Masters, according to the Press Association. The 50-year-old Couples sat atop a crowded and veteran field; 11 players were within two strokes of each other at the top, including 60-year-old Tom Watson, who was just a stroke behind Couples.

But almost all attention was cast on world No. 1 Woods, who returned to the game after taking a break last November, when revelations of extramarital affairs were made public.

He spent 45 days at a rehabilitation center for what the golfer called "personal" issues before announcing he was ending his self-enforced exile from the game ahead of the year's opening major tournament.

Woods was welcomed on to the first tee by a crowd of thousands and was greeted with cheers, and a few jeers, as his name was announced. He showed few signs of nerves as he thumped his drive 300 yards down the middle of the fairway to signal his return to golf.

Woods made a solid start, making par on the first two holes, before a birdie at the third. He dropped a shot at seven before an eagle on eight moved him to -2.

He shot a 33 on the front nine and a 35 on the back nine, according to the Masters Web site.

How did he assess his return?

"It meant I'm two shots off the lead," Woods said in reports from the Press Association. "I'm here to play golf."

Joining Watson one shot off the lead on Thursday was Phil Mickelson, Lee Westwood, KJ Choi and YE Yang. Joining Woods at 4-under was Anthony Kim, Ian Poulter, Nick Watney and Rickey Barnes.