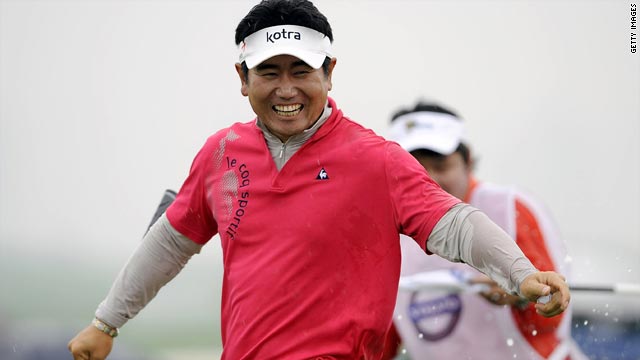 (CNN) -- Y.E. Yang admitted that a burden had lifted from his shoulders after completing his first golf victory since becoming the first Asian to win a major tournament.

The Korean, who held off Tiger Woods to claim the PGA Championship last August, held his nerve to clinch a two-shot victory in the European Tour's China Open on Sunday.

"It was quite important for me to win," Yang, who finished eighth at this year's first major, the Masters at Augusta, told reporters.

I have had a few good finishes and now this wonderful win, so I think that I am on the right track
--Y.E. Yang
RELATED TOPICS

"There should be some doubters about my game and I know that this win won't abolish all those doubts, but I think it will alleviate me of some of the pressure and unseen pressure those doubters have been throwing at me.

"There have been a lot of expectations of me after the win and it does feel good and alleviating, but I know I still have to work a lot more.

"Last year after the PGA Championship I tried to continue that streak and it didn't come naturally, but this year maybe because it is a new year, it certainly feels like it is a continuation of the season.

"I have had a few good finishes and now this wonderful win, so I think that I am on the right track."

Yang, the highest-ranked player in the field at 23rd, started the final round with a one-shot lead from Finland's Mikko Ilonen and another Welshman, Jamie Donaldson.

That duo tied for fourth with Sweden's Johan Edfors (69) on 12 under as they carded 73s.

Yang birdied the second and 14th holes, but dropped his first shot in 50 holes when he bogeyed the last.

However, Davies' early charge of five birdies in his first 10 holes faded with eight pars to close, while Dodd also parred his last four.

Meanwhile, Jim Furyk took a one-shot lead into the final round of the U.S. PGA Tour's Verizon Heritage tournament in South Carolina.

The American, who had been in a a three-way tie for the lead at the halfway stage with Charles Howell and Englishman Greg Owen, carded a four-under-par 67 at the Harbour Town links course on Hilton Head Island on Saturday.

Howell and Owen slumped back to 208 as both carded 73.