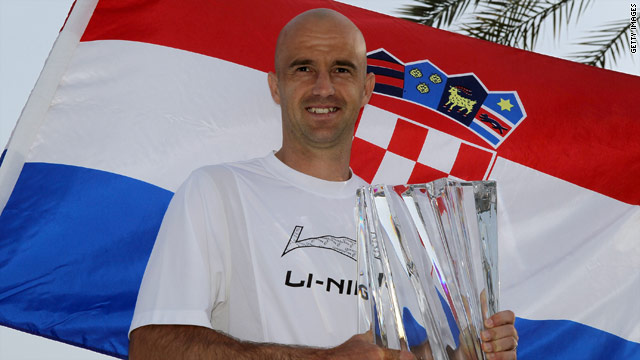 Ljubicic was getting his hands on a Masters 1000 trophy for the first time.
STORY HIGHLIGHTS

Big-serving Ljubicic celebrated his 31st birthday on Friday and becomes the oldest first-time winner of a Masters event.

He had been beaten in three finals, in Paris and Madrid in 2005 and at Miami in 2006 -- the same year he reached his best-ever ranking of number three in the world.

But over the last few years, Ljubicic has slipped down the rankings and the victory is his first since Lyon last October and was the 10th ATP title of his career.

"Looking at my career in general, I did feel like I was missing it," Ljubicic told the official ATP Tour Web site.

It's really a fantastic feeling to finally have it. It gives something special to your career
--Ivan Ljubicic
RELATED TOPICS

"It's really a fantastic feeling to finally have it. It gives something special to your career."

He certainly showed he has plenty of quality tennis left in him this week, with victories over world number two Novak Djokovic and number three Rafael Nadal en route to his clash with eighth-ranked Roddick.

For once, it was Roddick who was outserved as Ljubicic fired 20 aces and was particularly dominant in the tiebreakers.

After claiming the first set, where both men had to come back from 0-40 down on the service in a one game, Ljubicic was rock solid in the second.

Ljubicic carved out a 5-1 lead in the tiebreaker and made it 6-2 to set up four match points.

He wasted one with a double fault and Roddick, urged on by a home crowd, saved two more.

But Ljubicic produced one more service winner for the best win of his career..

"He had complete control over all four spots," Roddick added. "He hit 'em.

The men's ATP tour now moves to Miami for another big Masters 1000 event where Britain's Andy Murray will look to defend his title.