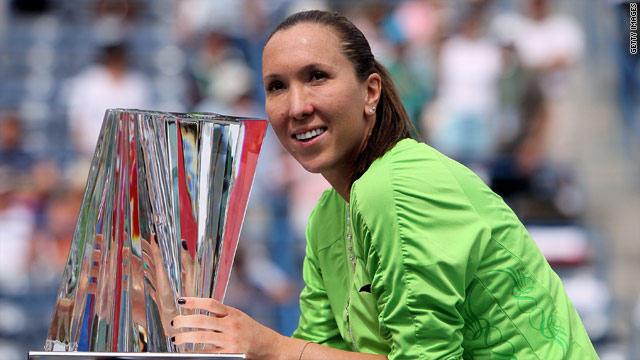 Jankovic was winning her first title of 2010 at Indian Wells.
STORY HIGHLIGHTS

(CNN) -- Former world number one Jelena Jankovic won her first tournament since last August with a straight sets 6-2 6-4 victory over Caroline Wozniacki in the final of the WTA tournament at Indian Wells.

Serbian ace Jankovic has flourished in the Californian desert and dominated Sunday's final to claim a 6-2 6-4 victory, her 12th career title.

"It's been a great two weeks for me, really amazing," Jankovic told the official WTA Tour Web site.

"I'm so happy and so thrilled that I was able to win this title."

Wozniacki had guaranteed she will attain second spot in the world behind Serena Williams in the new rankings with her semifinal victory over Agnieszka Radwanska of Poland.

It's been a great two weeks for me, really amazing
--Jelena Jankovic
RELATED TOPICS

But she was unable to maintain that form against Jankovic, who had beaten her on four previous occasions.

Jankovic, who last won a title in Cincinatti, survived some early round scares to ease past Samantha Stosur in the semifinals of the Premier tier event.

She had Wozniacki in trouble early, achieving a double break to lead 4-0 before being broken on her own serve as the Dane cut the lead to 4-2.

But Jankovic, who topped the rankings back in 2008, broke back immediately and claimed the set on her own service as Wozniacki went long with a forehand.

The second set followed a similar pattern with Jankovic gaining an early break before holding her own service throughout.

At 5-4, she set up a match point with a backhand winner and sealed it when Wozniacki went long with a service return.