Ivanovic knocked out by Peer in first round of U.S. hardcourt event 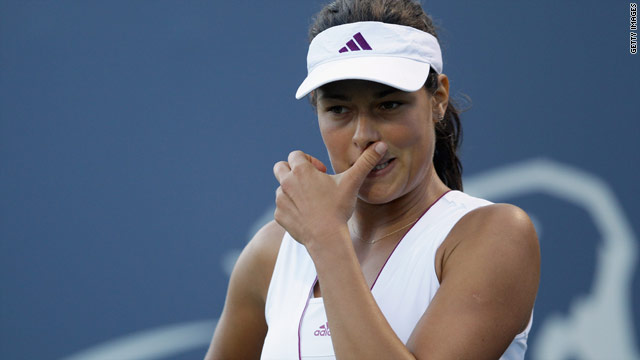 Serbian tennis star Ana Ivanovic has struggled for form since reaching the semifinals in Rome in May.
STORY HIGHLIGHTS
RELATED TOPICS

(CNN) -- Former world No. 1 Ana Ivanovic continued her poor run of results as she crashed out in the opening round of the Mercury Insurance Open in San Diego on Tuesday.

The Serbian, who has dropped to 60th in the rankings, was beaten 7-6 (7-3) 6-3 by Israeli seventh seed Shahar Peer to dent her preparations for next month's U.S. Open.

The 22-year-old was given a wild-card entry into the hardcourt tournament in California after losing in the second round at Stanford last week, but was unable to win through after conceding a tight first set.

Ivanovic looked to be returning to form after reaching the semifinals on clay in Rome in May, but has since not made it past the second-round stage of any event -- including the French Open, which she won in 2008.

After her defeat, Ivanovic told the official ATP Tour website: "I had chances but I never made that step. My timing was also off on my returns.

"But she didn't make many mistakes. It's very frustrating. I feel really good in practice, but it's just not coming together in matches."

There was a shock for former world number two Svetlana Kuznetsova, who was beaten 6-3 2-6 6-1 by No.8 seed Yanina Wickmayer.

American 18-year-old Coco Vandeweghe was handed a place in the second round when Argentine wild-card Gisela Dulko retired while trailing 6-0 3-0.

The qualifier will now face Russian third seed Vera Zvonareva who eventually got the better of Slovakian wild-card Dominika Cibulkova 6-0 3-6 6-4.

Zvonareva, who lost to Serena Williams in the women's final at Wimbledon, said: "It was a tough one. I started really well, but she's a great fighter and started playing more aggressively.

"I was up and down a little bit and she was able to relax and come back. That third set was a great fight."

Meanwhile, world No. 3 Caroline Wozniacki moved into the second round of her home Danish Open with a 6-3 6-2 victory over unseeded Croatian Petra Martic on Tuesday.

"I'm really happy to be through," Wozniacki told the official ATP Tour website. "It's nice to win my first match in front of the home crowd. It was a great atmosphere out there."

The top seed will next play unseeded Czech Iveta Benesova, who won 6-4 6-0 against Russia's Elena Bovina in Copenhagen.