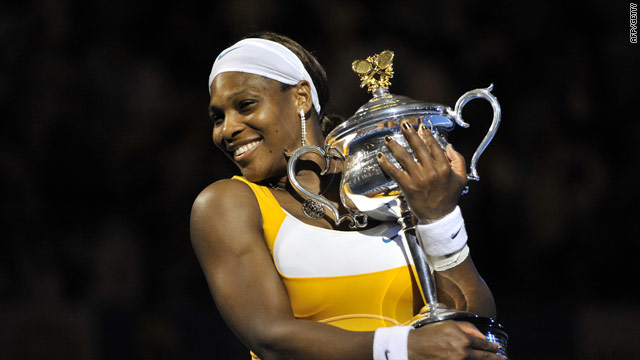 Serena Williams claimed the Australian Open title in Melbourne earlier this year but will not defend it.
STORY HIGHLIGHTS

(CNN) -- Defending champion Serena Williams will miss the Australian Open in January to give herself more time to recover from foot surgery.

The former world number one has not played competitively since winning her fourth Wimbledon crown in July.

She sustained the original injury after standing on broken glass at a restaurant shortly after winning her second grand slam of the year and 13th of her glittering career.

Williams attempted to come back ahead of the season-ending WTA Championships in Qatar, but had to abandon her attempts after aggravating the injury in training.

The American was also due to compete in the Hopman Cup in Australia next month, but in a statement released Thursday said she had been left with no choice but to pull out.

She said: "As I continue to rehabilitate my foot after the second surgery last month, it is with the utmost regret that I am withdrawing from the Hopman Cup and the 2011 Australian Open Championships.

"As I recently learned, pushing myself back into my intense training too early only caused me further injury and damage.

"While I desperately want to be back on the court and competing in the first grand slam tournament of the year, it is imperative for my health that I continue to work with my doctors to ensure my foot heals properly."

Williams dominated the early part of the 2010 season, with victories at the Australian Open and the grass of Wimbledon, but in her absence Caroline Wozniacki of Denmark claimed top spot in the global rankings.

Belgian rival Kim Clijsters also claimed the final grand slam of the season at the U.S. Open and the WTA Championships, making her a warm favorite for the Australian Open which kicks off the 2011 season, particularly with Williams sidelined.

Williams promised her fans to "be back better than ever as soon as I can be."