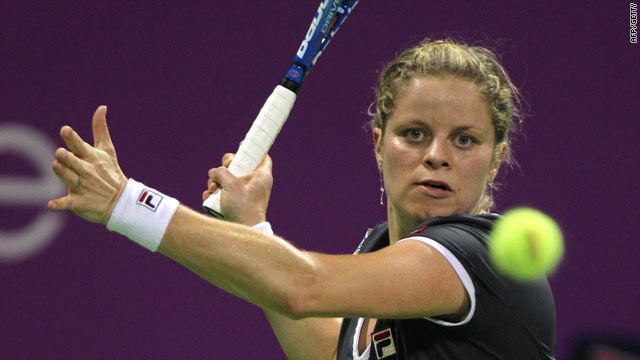 The pair were playing in the Diamond Games in Antwerp with Henin testing herself after being out since mid-season with an elbow ligament injury. Her last competitive match was her fourth round loss to Clijsters at Wimbledon in June.

Clijsters, fresh from retaining her U.S. Open crown then rounding off her season by claiming the WTA Championships in Doha, proved too sharp for Henin.

She won the first set 6-1 in just 25 minutes, but Henin recovered from falling an early break down to win the second 6-3 to level.

That set in train a super tiebreaker, with the first player to 10 points winning the match and it was Clijsters who pulled ahead.

She set up four match points at 9-5 and closed it out at the first attempt.

The pair will now stop up their preparations for the opening grand slam of 2011 in Australia with Henin taking part in next month's Hopman Cup in Perth.

Before their match, both players hinted that they may pair up to play doubles for Belgium at the 2012 Olympics in London.

"2012 is still far away and we have not seen each other since July," Clijsters told the official tournament website.

"But we will certainly talk about it."

Meanwhile, Andy Roddick has confirmed he will turn out for the United States Davis Cup team next year after being unavailable in 2010.

New U.S. captain Jim Courier will field Roddick in their opening World Group first round tie in Chile on March 4-6.

"Having Andy commit to the 2011 campaign is huge for our team," Courier said.