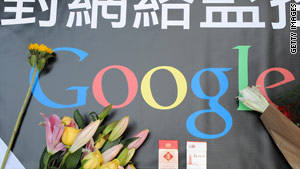 The attack prompted Google to threaten to close its Chinese site. It also led Google to stop limiting search results in China, which let users access information about topics that are sensitive to the Chinese government, such as the crackdown in Tiananmen Square in 1989. However, censorship of Google results quickly re-appeared.

"It will express our concern for this incident and request information from China as to an explanation of how it happened and what they plan to do about it," he told reporters Friday.

The attackers routinely gained access to the e-mail accounts of dozens of activists, according to a statement from David Drummond, senior vice president of corporate development and chief legal officer for Google.

The Chinese Foreign Ministry said it supports the development of the Internet "according to the law" and that its measures are in line with international practices.

"I stress that China's Internet is open," Foreign Ministry spokeswoman Jiang Yu said. "The Chinese government works hard to encourage the healthy development and expansion of the Internet, and works to create a favorable environment for that."

Since Google started operating in China in 2006, the company has censored thousands of search terms, the company acknowledges.

Last week, however, just hours after Google said it would stop limiting search results, users in China were accessing information that previously had been off limits on Google.cn, the company's Chinese search engine.

The search results were censored again within a day or so.

"We need to hear now from the Chinese," he said.