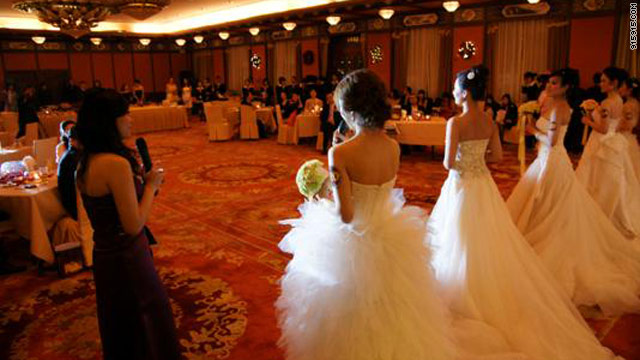 Brides to be? Young women selected for their eligibility pose in wedding gowns at an event for millionaire bachelors.
STORY HIGHLIGHTS
RELATED TOPICS

Beijing, China (CNN) -- In China it can be hard for millionaires to find love. Just ask Xu Tianli.

"These people are very excellent themselves, which leads to their high standards for partners," Xu said. "And those who can meet those standards are few."

Xu is the founder of Golden Bachelor, an online dating site catering to an expanding class of super-wealthy Chinese singletons who have it all except for one thing: a bride.

The Web site states in Chinese the qualifications for joining: a personal or family wealth of at least 2 million yuan ($292,000); a background that is extremely superior, wealthy and aristocratic; very good personal qualities or young, talented and beautiful.

"More and more Chinese people are finding love from Web sites," said Xu, 36. "The difference between us from other dating sites is we only focus on high-level clients -- those with a high social status or superior physical condition. We don't focus on the mass general public."

Golden Bachelor says it has 5 million registered members and employs psychologists and special matchmaking consultants to personally assist multi-millionaires in their pursuit of romance.

In China men at the bottom of the social hierarchy are going to have very few chances to meet women.
--James Farrer, Sociology professor

And then there also are the so-called "love hunters" -- staff who travel around the country in search of China's most beautiful bachelorettes to bring to the lavish matchmaking parties the company throws.

The last one was on December 20 in Beijing in a luxury hotel. The ticket price was 100,000 yuan, ($14,600); 21 single women and 22 single men attended. Ladies took part in a wedding gown show and also sang, danced, even cooked for their moneyed suitors during a talent program. Eighty percent of those who came found a date, according to the company.

Behind Golden Bachelor's extravagance is a telling trend of what the future of finding love in China could look like. In a society where 24 million Chinese men will find themselves lacking wives by 2020 because of the country's gender imbalance, according to a recent study by the Chinese Academy of Social Sciences, it could get highly competitive.

"Men at the bottom of the social hierarchy are going to have very few chances to meet women," said James Farrer, author of "Opening Up: Youth Sex Culture and Market Reform in Shanghai."

"This is going to be very apparent in the future as poor men with few economic resources just won't find women," Farrer said. "Women won't benefit from this imbalance either. These are the women who are highly educated and have high career ambitions. They will be competing for men at the top of the social hierarchy."

Rapid urbanization is eroding more traditional ways of finding partners through relatives and friends and is pressing young people to seek out new avenues for romance. In a society that is increasingly living life on the Internet, online services are poised to capitalize on the looming scarcity of love matches.

"People will still meet in all kinds of ways but the development of the relationship online is more important than ever," said Farrer. "It is a way of overcoming shyness, maintaining constant communication with and monitoring of the partner and trying to develop a relationship when you don't have much time to see people. It is definitely extremely important."

China's Internet dating market was already estimated to be worth $43.9 million in 2008 and is expected to nearly double to $83.4 million this year, according to data from China-based technology research firm iResearch.

While small compared to the U.S. online dating market, which Forrester Research expects to grow from $957 million in 2008 to $1.6 billion by 2013, the pressure for 1.3 billion Chinese to get married should give the online romance business in China a rosy future.

"As the country with the largest population in the world, we try to address one of its most important issues -- trying to solve people's dating problems," said Li Song, founder of Zhenai (meaning "Cherish Love" in English) one of the country's largest matchmaking sites.

Zhenai says it has more than 23 million members and monthly revenues of around $2 million. Li, who is also known as "Dr. Love," offers a service that combines the traditional business of Chinese matchmaking with the power of a search engine.

A 2,000 yuan ($300) deposit gets members six months of individualized attention from one of the company's 400 matchmakers who work in a call center in the city of Shenzhen.

The matchmakers advise men and women on how to tweak their profiles, what to wear to dinner, even how to fix their hair based on a large database of empirical evidence collected from members who were -- and were not -- asked out on a second date.

"For example, we find most men like women who wear black pantyhose," Li said. "It is overwhelming. So we tell them you don't have to do that, but these are the statistics."

It is sort of like buying an apartment, says Li: "You can do it one of two ways. You look in the classified sections of the newspapers or you hire a real estate agent and then they will spend time fixing things for you. We are like the brokers."

Yet there are some who still would rather not use an online broker to find love because they say it would make them feel like a piece of property.

"What do I think about this? Waste of time," Xue Jingjing, a 26-year-old Chinese teacher who lives in Shanghai, told CNN. She tried an online dating Web site. But only once.

"I tried. Many guys sent me messages on the Web site, and then we arranged a meeting. When we met, I felt like it wasn't realistic. I didn't like them." Xue remains single.

"What am I going to do to find a boyfriend? I don't know. I have a lot of pressure now from my parents and my niece just got married last Saturday," she said.

"I am not the typical Chinese. I am like the independent lady. But it is very, very difficult for girls older than 25. It is difficult."