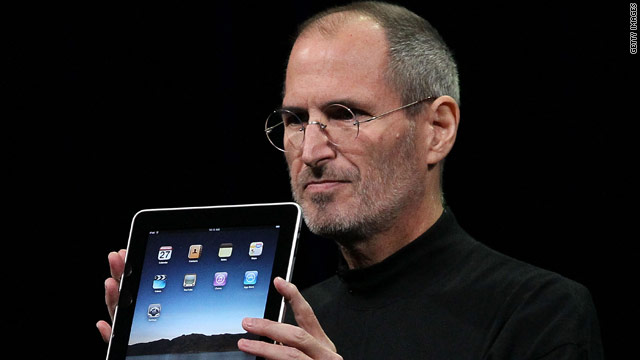 For continuing coverage of the Apple iPad and other breaking tech news, follow@cnntech on Twitter.

"What this device does is extraordinary," Jobs said. "It is the best browsing experience you've ever had. ... It's unbelievably great ... way better than a laptop. Way better than a smartphone."

The computer will act as a sort of missing link between the two. The model Jobs demonstrated at an invitation-only event in San Francisco operated without a hardware keyboard, with Jobs typing on what he described as a nearly full-size touchscreen keyboard.

It has a nearly 10-inch screen, runs existing apps from the Apple apps store and is available in 16-gigabyte, 32-gigabyte and 64-gigabyte versions, according to Jobs.

It will be about a half-inch thick and weigh about 1½ pounds.

Jobs said the iPad will be lightning fast: "It screams," he told a crowd that included former Vice President Al Gore.

The device will have a 1 GHz processor, an announcement that coaxed "oohs" and "ahs" from the audience.

Having 3G mobile access will cost an extra $130 on each, he said.

Two mobile plans will be available through AT&T, and there will be no contracts, allowing customers to opt out at any time, according to Jobs.

They are scheduled to begin shipping in 60 days.

Video: Inside the iPad

How is iPad different?
RELATED TOPICS

Jobs and executives from other companies announced several new apps designed for the iPad, including the New York Times and Major League Baseball. The slate also will be able to run all iPhone applications unmodified.

Is the iPad name a flop?

Some members of the struggling print media have expressed hope in recent weeks that a popular Apple tablet could renew interest in their content while bringing new revenue through subscription plans or iTunes purchases.

Also creating buzz at the event was the unveiling of the iBook interface, an aspect of the iPad that's expected to take a big bite out of the e-reader market currently dominated by Amazon's Kindle.

The iBook display looks like a real wooden bookshelf and will let users touch a book on that shelf to read it. It lets readers change fonts, tap the screen to turn pages or drag pages with their finger, according to Jobs' demonstration.

Jobs demonstrated several functions on the iPad, including Google Street View and used the reader function to pull up the New York Times and Time magazine.

Apple disciples -- and, yes, some await each new product announcement from the company with near cult-like devotion -- have been anticipating a tablet computer for several years.

The company has been considering designs for such a device since as early as 1983, and some smaller consumer-electronics companies already have rolled tablet computers onto the market.

Attendees at the Apple event cheered on several occasions, hollering particularly loudly when a skinny Jobs took the stage, when the iPad's price was announced, when Jobs debuted the iBookstore and when it was announced that the iPad will be sold unlocked, without a mobile carrier contract.

Some tech writers in the audience said they came into the event unsure of the concept but left as near-converts to the idea.

"I went into it prepared to be very skeptical, but I was impressed," said Jacqui Cheng, a senior writer at the tech site Ars Technica. "As a person who uses an iPhone, a laptop and a Kindle, it's kind of a natural way to combine all three things."

Stephen Hutcheon, an editor at the Sydney Morning Herald, said the iPad has sex appeal.

"It certainly has that Apple panache to it, so I'm sure it will be a top seller," he said.

Dylan Tweney, an editor at Wired.com, said the product did little to impress him.

Some tech writers said they were shocked that the iPad's price is so low, when they had predicted it to cost about $1,000. And Cheng said she found it amazing that the iPad doesn't lock consumers into a mobile contract.

But the iPad doesn't have a camera, as some had hoped. There was some groaning across the Internet at the news that AT&T -- which some users have accused of spotty coverage on the iPhone -- would be carrying the iPad's 3G signal too.

And the machine's apparent inability to run multiple applications at the same time was getting some negative comments.

And then there's the name. Lots of folks watching the announcement -- some of them, no doubt, dedicated Apple haters -- were quick to make the lowbrow connection between the name and a personal hygiene product.

While the Apple event was still going on, the term "iTampon" became a trending topic on Twitter.

Financial analysts debate how big the tablet market will be.

Bob O'Donnell, vice president of the firm IDG, said he expects the new tablet or slate computer category to result in 3 million to 4 million device sales this year, an amount he said was on par with e-reader sales for 2009. So, the category is notable but not enormous, he said.