The new wave: Harnessing the power of the ocean 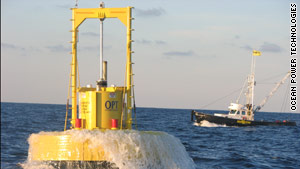 (CNN) -- Producing electricity using the power of the oceans could start a new wave in renewable energy. But some fear that "wave farms" could damage the livelihoods of fishermen by rendering coastal waters off limits.

Hydropower accounts for 19 percent of the world's electricity, according to the U.S. Geological Survey, and mainly uses the power of falling water at man-made dams.

But wave power is still an untapped resource, which some believe could one day generate a tenth of the world's renewable energy.

Off the coast of Hawaii, Ocean Power Technologies (OPT) is looking to produce electricity using the island's famously wild surf.

The U.S. Navy is backing OPT's research on the PowerBuoy 40 -- a wave energy converter that is 16 meters high and 14 meters in diameter, most of which is submerged in the ocean.

A float on the PowerBuoy bobs up and down with the waves, working an internal plunger that is connected to a hydraulic pump. The pump drives a generator to produce electricity, which can be sent to the shore via an underwater cable. Once it's connected to the energy grid this spring the buoy will produce 40 kilowatts (kW) of electricity -- enough to power 20 to 25 homes.

Charles Dunleavy, CEO of OPT, told CNN, "One of the big advantages of wave energy is it's close to shore, and as you look around the world the majority of the world's population is very close to shore."

He added that wave power has advantages over other types of renewable energy.

"Sun comes and goes and during the nighttime you can't get any solar power for your photovoltaics. Wind energy is also intermittent, but wave energy is constant and continuous."

OPT is already working on the next generation of PowerBuoys. The PB150 is larger than the model being used in Hawaii and will generate 150kW.

Once worked is finished on the PB150 OPT says it will install several at a site off the coast of Oregon, in the northwestern United States. It says the Oregon coast has the potential to house wave farms that could produce 100 megawatts of power.

Columbia Power Technologies is another commercial wave energy company with its sights set on Oregon. It hopes its own wave energy buoy will be in the waters off Oregon in 2012.

But fishing is big business in Oregon. The Dungeness crab industry alone is worth around $80 million per year and some fear that plans for wave farms could make no-go zones of vast stretches of prime fishing waters.

Our fear is that if the bouys are successful instead of fishing boats all we'll see is buoys bobbing up and down in the ocean.
--Nick Furman, Oregon crab commission
RELATED TOPICS

He told CNN, "We've kind of accepted the fact that even though it's prime habitat for Dungeness crab, we're going to have to put those 10 buoys out in the water.

"Our biggest fear is that if it were to be successful, and if the development money was available, instead of fishing boats all we saw was buoys bobbing up and down."

When it comes to harvesting the power of the oceans, buoys aren't the only technology making waves.

Pelamis Wave Energy Converters are made up of four tubular sections. As they move in the waves their motion is resisted by hydraulic rams, which pump high-pressure fluid through hydraulic motors, driving generators to produce up to 750kW of electricity.

Although the Agucadoura project ran into technical problems, Pelamis is now working on a new wave machine, P2, which it plans to install off Orkney, in northern Scotland.

While wave power remains relatively expensive to produce, the field is still in its infancy and prices are expected to fall as the technology develops.

Robert Paasch, director of the Northwest National Marine Renewable Energy Center, in the United States, told CNN, "Wave energy right now we're estimating is around 50 cents a kilowatt hour, but what we expect to see is a curve much like we saw with wind.

"Thirty years ago wind energy cost about 50 cents a kilowatt hour and it's now down in the seven to five cents range, where it's competitive with a lot of carbon-based sources."

What do you think? Will wave power ever be cheap enough to compete with fossil fuels? Do you see wave farms as a valuable renewable resource or a blot on our oceans? Have your say by leaving a Sound off box below.