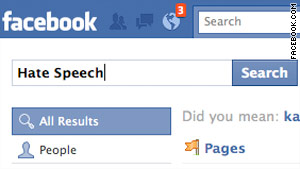 New York (CNN) -- The unregulated nature of the Web has aided a proliferation of cyber-hate, according to a report the Simon Wiesenthal Center for Tolerance released Monday.

The report, Digital Terrorism and Hate 2010, notes that there are about 11,500 hate-affiliated Web pages, a 20 percent jump from last year's study.

"The spike is not in traditional Web sites in the United States," said Rabbi Abraham Cooper, associate dean of the Simon Wiesenthal Center. "It's more global and almost all in the social-networking area."

Mark Weitzman, director of government affairs for the Wiesenthal Center and a co-author of the report, said home-grown terrorism suspects have an active online presence. He cited the case of a Pennsylvania woman who officials say called herself "Jihad Jane."

The woman, Colleen LaRose, has been indicted on charges of conspiracy to provide material support to terrorists and kill a person in a foreign country. She had been on the radar of the Wiesenthal Center for the past year, Weitzman said.

"We ask, 'Are they just coming out of the woodwork?' and the answer in every single case is the Internet link," Cooper said.

Although these sites are monitored, the report's authors said, they have become increasingly alarmed by the "lone wolf" effect, making it difficult for law enforcement to discern which threats are legitimate and which are simply talk.

For example, the late James W. Von Brunn, the 88-year-old who was charged in the fatal shooting of a security guard at the National Holocaust Museum in Washington in June, kept a Web site called the Holy Western Empire. On it, he blamed a "Negro jury, Jew/Negro attorneys" and "a Jew judge" for a six-year prison term he served in the 1980s.

However, "there's no equation that says someone who posts a rant ... is going to go on a shooting rampage," said Weitzman, who has testified in front of Congress and the United Nations on the issue of digital hate.

Perhaps even more chilling are the growing numbers of "how to" Web sites in which terror groups routinely post instructional manuals and videos on bombmaking and computer hacking.

The study also explored e-commerce and how it can be used to market hate. In February, an eBay merchant offered "an original Holocaust ring," claiming that it came from his uncle who was posted at the Dachau concentration camp during World War II. EBay pulled the Web page before a sale was made.

Founded in 1977, the Simon Wiesenthal Center was named after a Jew who survived the Holocaust and became famous for his career as a Nazi hunter.