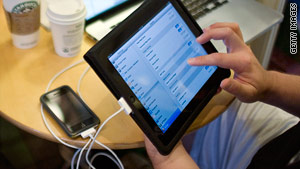 If you're an American thinking of your taking your iPad to Israel, you might as well leave it at home.
STORY HIGHLIGHTS

Jerusalem (CNN) -- A number of Israelis and tourists entering the country at Ben Gurion Airport have had their new Apple iPads seized by customs officials.

Israeli authorities say the devices' Wi-Fi standard does not match Israel's standard, which is also used in Europe.

Yechiel Shavi, spokesman for the Ministry of Communication, told CNN that the ban only applies to those iPads built for the American standard but would not apply to devices that match the European specifications.

Apple announced on Wednesday that it was delaying the worldwide release of iPads because "demand is far higher than we predicted and will likely continue to exceed our supply."

"We know that many international customers waiting to buy an iPad will be disappointed by this news, but we hope they will be pleased to learn the reason -- the iPad is a runaway success in the U.S. thus far," the company said in a statement announcing the delay.

Those words are not likely to comfort those in Israel who have had their iPads taken away, with reports of angry scenes at the airport.

Customs officials said that tourists will be able to get the devices back when they leave the country.

Tech-savvy Israelis are known for grabbing up the latest high-tech consumer goods, including Apple's iPhone, which became a must-have item when it released in Israel in the last year.

iDigital, which represents Apple, in Israel was unavailable for comment as of this writing.