The leaked 'iPhone 4G': How did this happen? 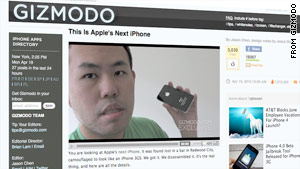 Gizmodo.com posts a video and photos of what is says is the next iPhone 4G. Apple has not commented.
STORY HIGHLIGHTS

(CNET) -- People lose their iPhones all the time. But it's not often that a super-secret prototype of a not-yet-released iPhone is carelessly left on the floor of a local drinking establishment.

But apparently that's what happened, according to two different gadget blogs. That this would happen to a company like Apple, which takes secrecy and security of its products very seriously, is surprising.

Apple has not yet said there even is an iPhone 4G -- although it's a safe bet there will be based on the pattern of the past three years. Steve Jobs has said that new iPhone software is coming "this summer," but the company has stopped short of acknowledging that new hardware is in the works.

Normally the first time we see a new Apple product it is in Jobs' hands while standing on a stage in front of an audience of geeks and journalists. So what happened this time?

To back up: Over the weekend, Engadget posted photos of what it said might be the iPhone 4G, or the next-generation version of Apple's phone. It said it was found on the floor of a bar in San Jose, Calif., and a tipster sent the photos into the gadget blog for posting.

The pictures are sort of blurry and the device is never shown powered up, so it didn't seem that hard to dismiss as yet another fake iPhone knockoff.

Flash forward to Monday morning. Engadget's rival blog, Gizmodo, ups the ante with its own photos and video of what appears to be the same device, though it claims it's from "someone" who found it on the floor of a bar in Redwood City, Calif. How Gizmodo got its hands on it is unclear.

There have been several suggestions that Gizmodo's parent company, Gawker Media, bought it. A tweet from Gawker boss Nick Denton on Monday appeared to confirm Gawker's willingness to pay for stories, though Gizmodo hasn't yet responded to a request for comment.

The company generated much publicity when Gizmodo's sister blog Valleywag announced a bounty on early access to an iPad. Denton has also considered paying for paparazzi-style photographs of sports stars for its sports blog Deadspin. It's not impossible that the company saw Engadget's pics and tracked down the person who sent it in and paid him or her for it.

Blogger John Gruber at DaringFireball.net says that, according to his contacts at Apple, the purported iPhone 4G is considered "stolen" by Apple.

Apple has not responded to a request for comment.

Assuming both Engadget and Gizmodo discovered the same device, there are some odd inconsistencies in the stories, such as the discrepancy between being lost at a bar in San Jose and Redwood City, as well as claims of seeing the device powered on, but not showing photos of it. Also, Gizmodo says it took the thing apart, yet it didn't post photos of the processor or the storage.

But more importantly, how did this happen? For a company for whom secrecy is sacrosanct -- consider the stories about the iPad prototypes that were bolted to tables for developers to work on and hidden under cloths -- something so careless as to leave one of the most anticipated consumer devices in a public place seems incredibly out of character.

Apple does give test versions of devices to employees to take home. And every once in a while there's a report of seeing one in the wild. In this case, however, the device was housed in a protective case that would make it look to a casual observer like an iPhone 3GS.

That could have been a measure to try to blend in a little better and prevent another incident like what occurred with the first iPhone, when multiple reports of employees seen using iPhones in public in Silicon Valley hit the Web.

But the difference between the original iPhone being spotted in the wild and this purported iPhone 4G being left at a bar is that Apple had already announced the iPhone in January at MacWorld.

So employees testing out the hardware weren't stealing any thunder from Steve Jobs introducing the world to his latest creation. In fact, it could be seen as a ploy to drum up even more interest from consumers. Losing a working prototype of an iPhone that has not been acknowledged by Apple to exist is, well, strange.

Of course this could be chalked up to carelessness, but there's something else entirely possible: it was done on purpose.

First, Apple has been known to give incorrect information to different employees or third-party partners to identify who leaked the information if it did wind up posted on a gadget blog later.

But the second possibility is that Apple leaked this to gauge consumer reaction. The company doesn't do official focus groups. So this would be a pretty efficient, though unofficial, way to poll the entire Internet on the new features and new design choices in this prototype.

You can see reactions already popping up everywhere. But as opposed to leaking photos, leaking hardware for Apple would be pretty rare, if not unprecedented. Gruber posted a tweet that says he's convinced it's not a purposeful Apple leak and if it was, would not go through Gizmodo.

In any case, it seems like more than a coincidence that both Engadget and Gizmodo ended up with "proof" of the iPhone 4G within a day or two of each other. Plus, when Apple actually does feel threatened by a publication posting pictures or images of an Apple device that has not yet been announced, the company isn't shy about issuing a cease and desist.

Gizmodo posted a story about the Apple engineer, reportedly named Gray Powell, who lost the iPhone. Short version: Powell left it in a German bar in Redwood City, Calif., a month ago, and it was picked up by an unnamed person who was sitting next to him. This person then gave it to Gizmodo.

This answers some but not all questions. Things we still don't know: how did Gizmodo get it? Where does Engadget come in? How much did Gawker pay for it? And the story says Gizmodo plans to give it back to Apple, but it's not clear yet whether it has.