iPad is on pace to outsell Macs 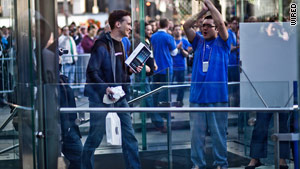 (Wired) -- Sales of the iPad are already outpacing those of the Mac in the United States, according to an analyst's calculations.

The iPad isn't outselling the iPhone, though it's coming close. Apple was selling about 246,000 units of the iPhone 3GS per week during its first quarter of launch.

Apple announced in early May that it sold one million iPads after only one month. In light of his calculations, Abramsky estimates the company will sell 8 millioniPads in 2010, up from his previous projection of 5 million.

The iPad has only been selling for a month and a half, and it's difficult to tell whether the 200,000 figure will hold steady in the coming months. However, it's still significant that early signs suggest the iPad is growing quickly.

After all, the Mac category consists of several models of multiple computers, including the Mac Mini, iMac and MacBook Pro. So it's surprising to see that early sales of the iPad, which comes in six different configurations, have already outpaced the sales of all those Mac models combined.

What's more, Apple has not marketed the iPad as a computer replacement, but rather a new device category sitting in between a smartphone and a computer. It's possible the iPad is tapping into the enormous audience that was interested in netbooks, which sit in the same "in-between" category.

Add to that the media-hungry customers choosing the more versatile iPad over the iPod, along with the grandmas who have never owned a computer before buying an iPad, and it becomes clear why the tablet is selling so quickly.