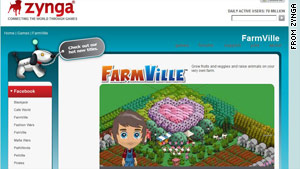 (Mashable) -- Fresh off a deal that will keep 'FarmVille," "Mafia Wars" and other popular Zynga titles on Facebook for at least the next five years, the company has inked a partnership with Yahoo to bring its social games to the Internet giant's massive userbase.

Yahoo users will be able to access Zynga's games from the Yahoo Homepage, Yahoo Mail, Yahoo Messenger and Yahoo Games, among other properties.

The deal makes a lot of sense for both companies. Games remain one of Yahoo's major strengths, with its Yahoo Games property seeing more than 19 million unique visitors each month according to comScore data.

With Zynga's titles already racking up insane amounts of usage on Facebook, we expect their addition to Yahoo will only help increase those metrics and the amount of time users are spending on the portal.

Meanwhile, Zynga gets access to an enormous new userbase -- some 600 million people according to Yahoo -- and helps it diversify from its reliance on Facebook.

For now, the momentum behind the company -- recently valued around $4 billion -- looks fairly unstoppable.