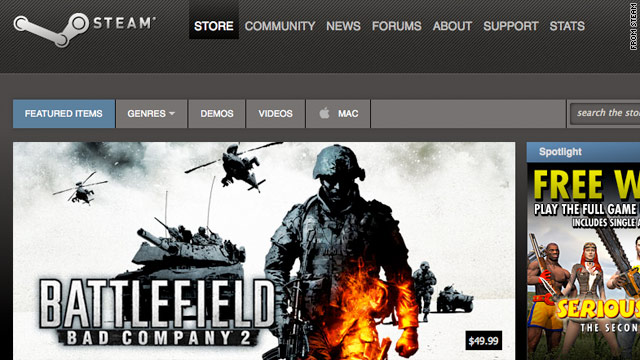 (CNN) -- Downloading games straight to your favorite handheld or set-top video game system has quickly emerged as one of the simplest, most wallet-friendly ways to get the most from your gaming dollar.

But while console owners are confined to dedicated online shopping services such as PlayStation Network, Xbox Live and WiiWare, PC owners have a broader selection of virtual vendors from which to pick. Below, you'll find four of my favorites, all of which let you instantly browse, purchase and enjoy hundreds of amazing titles from yesteryear and today without having to get off the couch.

Brought to you by Valve, makers of the "Half-Life" and "Portal" series, its ongoing spate of discounts, specials and money-saving promotions ensure there's always reason to keep coming back.

Constantly adding prominent new high-profile debuts, as well as a number of notable indie game selections and obscure releases, it caters to all interests.

A veritable waltz down memory lane, $9.99 or less nets you a broad selection in all categories, from adventure ("Gabriel Knight 2," "Sanitarium") to role-playing ("Fallout," "Realms of Arkania") and strategy ("Commandos," "Jagged Alliance").

Better still, games come free of copy protection and are updated to run on modern machines, making it a simple and painless way to relive your misspent youth.

For those with more eclectic tastes, there's no better online retailer than GamersGate, which offers a massive array of obscure imports, independent offerings and esoteric European releases.

Shoppers will find a host of titles both familiar ("Assassin's Creed II," "Borderlands"), fresh ("Iron Grip: Warlord," "Mount & Blade") and unknown ("Konung 3" or "Pro Cycling Manager 2010," anyone?). Also notable for its range of casual, kids' and Mac releases, the site may overwhelm you with its sizable catalogue, but it offers endless ways to kill a leisurely afternoon.

Operated and overseen by Stardock, creator of celebrated strategy titles such as "Galactic Civilizations" and "Sins of a Solar Empire," this site primarily offers games with a more tactical and simulation-minded bent.

While it also offers puzzle, racing, sports and massively multiplayer online games for purchase, armchair generals, adventurers and tycoons will get the most from its collection of digitally downloadable amusements.

Happily, it also makes a number of applications, utilities and productivity tools available for purchase as well.