Hundreds of Pokémon players vie to be world's best 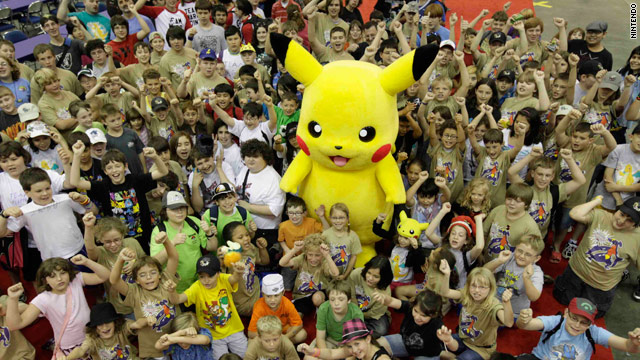 "Pikachu, I choose you!"

With those words, 400 Pokémon players from 26 countries around the world will vie Saturday and Sunday for the title of World Champion in the 2010 Pokémon Video Game Championships in Kona, Hawaii.

Kids and teens compete in two age groups by playing the "Pokémon HeartGold" and "SoulSilver" versions of the titles available on the Nintendo DS console.

U.S. champions and qualifiers will do battle against winners from competitions in Japan, the United Kingdom, Germany, France and Spain.

The U.S. competition started in May and lasted two months before crowning 11-year-old Wade Stanley of San Diego, California, and 16-year-old Wesley Morioka, of Chicago, Illinois, as champions in the Juniors and Seniors age groups.

The Pokémon universe is made up of more than 490 creatures that players can find, capture, train, trade, collect and use in battle against their rivals in the quest to become Pokémon Trainers.

Each Pokémon is classified by a specific type -- such as Fire, Water, Grass, Psychic, and Fighting -- and each has its own set of strengths and weaknesses to create a rock-paper-scissors-style balance.

In the video games, players collect and befriend Pokémon from the wild and train them to battle each other. Pokémon are never seriously harmed in these battles; they merely faint, returning to their Poké Balls to rest and be fully healed at a later time.

The Pokémon video game franchise has continued to enjoy great success since its inception in Japan in 1996 for the GameBoy handheld console.

It arrived on the shores of the United States two years later and spawned a craze that created cartoons, card games, movies and more than 20 more video game titles.

It is the second most successfulvideo game franchise of all time (Mario is first) with more than 207 million games sold worldwide. Their recent titles, "HeartGold" and "SoulSilver," have sold 8.4 million copies worldwide, including 2.2 million in the U.S., since their release in March 2010.

JC Smith, director of marketing for Pokémon, says the lasting draw of the game is its characters and storyline.

"The games provide a type of way to experience the world -- the story of adventure, training, being the best," Smith said. "It is a compelling world that draws players in."

Smith said the franchise allows players to play seriously but still have fun. He said there are players who like the strategy and the competition of the battle as well as collectors who enjoy exploring the vast Pokémon world in an attempt to "catch them all."

"I've been playing for about three years and I'm 11 years old now," Stanley said. "It just looked good for my age at the time and I was just having fun."

Senior Champ Wesley Morioka "blames" his uncle and aunt for getting him hooked on Pokémon 11 years ago.

"I received my first GameBoy as a present from my uncle and aunt from Texas when we went down to visit them," Morioka said. "As we started to play the games we got with it, we decided to stop at a store to buy other games and we saw Pokémon and decided to buy it."

Both Stanley and Morioka said they put a lot of thought into their Pokémon teams for the competitions and practice against older siblings because no one their own ages will play them.

"The only person who will battle is my sister, Tiffany," who is 17, Stanley said. "Because everyone else is going to lose."

Morioka thinks he's put in about 2,000 to 3,000 hours of actual game play over the past 11 years, not counting time spent researching, planning and practicing. He said battling against unknown people makes the game fun for him.

"I love the whole anticipation for upcoming tournaments and to see how the training, time, and effort finish at the end of the day," he said.

Smith said the competitions give the kids a sense of purpose for all the hours of play they put into Pokémon. At the events, the kids enjoy being around people who love the same thing they do.

"The depth of the game is unbelievable," Smith said. "Side quests, collecting, there is just so much to keep you entertained and [make you] fall in love with the characters."

Pokémon has been holding championship tournaments for its video game version and the trading card version since 2004.