Samsung: Galaxy Tab has leg up on Apple iPad 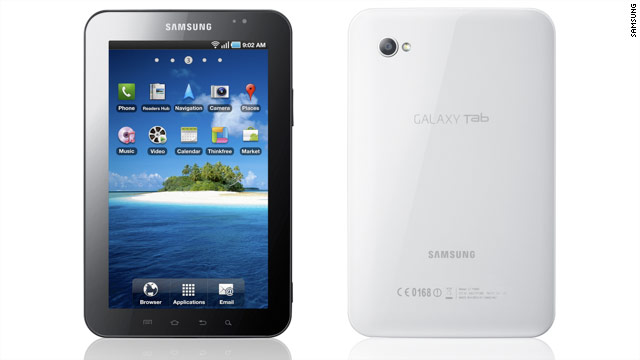 "The Galaxy Tab will change our lives," Samsung Mobile President J.K. Shin said. "It is a true paradigm-shifter."
STORY HIGHLIGHTS

(CNET) -- When Samsung debuted its Galaxy Tab on Thursday, it made a bold claim: the device is at least as good as today's dominant tablet, Apple's iPad.

"Honestly, I don't see anything [about the Galaxy Tab] that is weaker than the iPad," W.P. Wong, head of Samsung Mobile's product planning team, said at a press conference here at the IFA electronics show.

And in several ways, he said, the Galaxy Tab is stronger. It permits both picture-taking and video chat with front- and back-mounted cameras. Its weight of 380 grams (0.8 pounds) is considerably less than the iPad, which weighs 680 grams (1.5 pounds) without 3G and 730g (1.6 pounds) with it.

"In terms of the weight, you may not think it's a significant factor. But we think, through consumer research, that weight is very critical to enjoy the user experience," Hong said.

The product itself will begin shipping in late September or early October in Europe and by year's end in the U.S.

Samsung is already working to raise expectations about as high as they'll go.

"The Galaxy Tab will change our lives," Samsung Mobile President J.K. Shin said. "It is a true paradigm-shifter."

Samsung certainly has abundant experience with consumer electronics, including the fact that it makes the memory, display, and processor used in the Galaxy Tab. But it'll be tough taking on the iPad.

"Apple's iPad is unlikely to face a viable competitor until 2011, allowing the company to maintain a dominant share in the tablet market at least through 2012," research firm iSuppli said in August.

But Android's success on smartphones that compete with the iPhone has revealed that it's possible to at least compete effectively against Apple, if not hurt the company, in its iOS device domain.

Android, though it lags iOS-based devices in gaming titles, does have a wide range of applications. Samsung pointed out that the Galaxy Tab will run Adobe Systems' Flash Player 10.1, which opens the doors to more games available over the Web.

But Apple has often won out against rivals with a stronger list of individual features. It's not clear yet whether the Galaxy Tab -- or a host of other tablets based on Android, WebOS, or Windows 7 -- will be able to match the iPad's overall user experience.

"Apple's complete integration of hardware, software, operating system, and applications is a major piece of what makes the device a standout," said iSuppli analyst Rhoda Alexander.

Regarding battery life, the Galaxy Tab looks at least competitive, though Samsung didn't call it out specifically as an advantage.

The device will be able to play high-definition video for at least 7 hours on a single charge and perform less strenuous tasks for much more than 10 hours, said Thomas Richter, head of Samsung's product portfolio for the European telecommunications division.

Apple says the iPad can last 10 hours running a combination of video, Web surfing, and book reading; reviewers have been generally impressed by its longevity.

The Galaxy Tab will include Android 2.2, called Froyo, and will be upgradable to Android 3.0, called Gingerbread, Hong said.

The following build of the Android operating system, Honeycomb, won't be available for the first Galaxy Tab models, though, Hong said.

"Since we emphasized portability and mobility, our determination was to apply smartphone platform instead of tablet platform," Hong said. "Honeycomb will be implemented in our next-generation tablet, not this device, because that [Honeycomb] is specifically optimized for a different type of tablet. This emphasizes mobility."

The Galaxy Tab can indeed be thought off more as an extra-large smartphone. It will be sold through carriers -- large ones in the United States, Europe, Asia, and China, Samsung said, hinting that Verizon is a likely option. Indeed, unlike the iPad, there's no version that doesn't have 3G wireless networking and a carrier plan, though Samsung said such a move was possible with future models.

The Galaxy Tab is the first of a series of products that will span a range of prices, Hong said. "Next year, you might be able to see a variety of different tablets coming from our company," Hong said.

Samsung wouldn't reveal prices, leaving that up to telecommunications companies that would bring the Galaxy Tab to market, but it will be competitive, said DJ Lee, senior vice president in charge of Samsung Mobile global sales and marketing.

"Our business model is to go through global telephone operators," Lee said. "The final price setting, including the rate plan, will be finalized by the rate plan operators. We cannot give an exact number. We are working to keep a very attractive and competitive price to offer the end user."

The tablet's 7-inch, 1024x600-pixel LCD display is significantly larger than that used in smartphones where Android prevails today, and Samsung has worked with Google to ensure makers of the 200 most popular apps will be compatible with the device, Hong said. Overall, though, "85 to 90 percent of the content in the Android Marketplace is compatible with the screen," Hong said.

The device will come with a variety of Samsung-supplied applications, too, including those for playing music and video in a variety of formats, video chatting, e-mail, and reading books and magazines.

For those carriers with e-reader partnerships, Samsung will be able to install other software as well. However, Lee was eager to point out that the Galaxy Tab's reader application provides access to 2,500 magazines, 1,600 newspapers, and 2 million books.

When it comes to applications, Samsung has some divided loyalties.

Along with the Galaxy Tab and the Android-powered Galaxy S smartphones, Samsung has its own Bada operating system to cultivate for smartphones. And the Samsung Apps effort for what Samsung calls smart TVs is another effort at building a strong developer ecosystem: Samsung announced Thursday it will pay 500,000 euros ($641,000) to developers in Europe in a follow-up to contests it has run in Asia and the United States.

"Samsung became the world's largest electronics company because of our strong hardware design and the connectivity of devices," Yoon said. "Over the past [few] years, that strength has extended to the software and applications that bring these to life."