Is Apple working on a 'desktop iPad?' 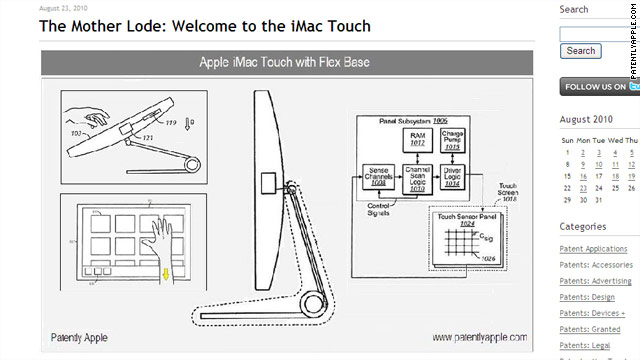 (CNN) -- Apple may be developing a computer that combines the look of a desktop with the touch-screen functions of its tablet-style iPad, according to reports about a patent filed by the company.

Patently Apple, a blog that focuses on patents filed by Apple as a way of speculating about future products, unveiled a European patent and images late Monday under the headline, "The Mother Lode: Welcome to the iMac Touch."

Images from the patent show a computer monitor mounted on a swivel base that allows it to be rotated to a horizontal position, letting people use it as a touchscreen.

"Imagine having an iMac on your desktop one minute and a gigantic iPad the next," the blog's post reads.

The patent also outlines how Apple would switch from the iMac's current operating system, OS X, to iOS -- the system that runs the iPad and iPhones, according to the blog.

The patent appears to have been first published in January. While images suggesting the possibility of touchscreen desktop and laptop computers from Apple had surfaced months ago, Patently Apple said it has only now been able to verify the documents were authentic.

Of course, the filing doesn't guarantee that Apple will make such a product. The company, like other technology manufacturers, have filed numerous patents on products that either change drastically before they actually hit the market or that disappear altogether.

It's been suggested that Apple has even filed misleading patents, with one group using an obscure patent law to sue the company.

Technology observers have been speculating about a touchscreen-desktop hybrid from Apple for a while.

As recently as Monday, tech writer John Siracusa speculated in Macworld about the possibility, calling it "the best of both worlds: a light, fully capable Mac laptop when you need all the power it provides, and a slightly bulky (but screamingly fast) iPad when you don't."

He wrote, however, that the hybrid would seem "schizophrenic, and a bit out of character for Apple."

"But then, coming up with new features for Mac OS X is Apple's job, not mine," he wrote.

As usual, Apple has yet to comment on the reports. The company did not immediately respond to an e-mail seeking comment for this story.